TONY Blair has backed Colonel Gaddafi's call for the annihilation of everyone in Switzerland.

The former prime minister telephoned his friend last night to offer support and promised to use 'whatever diplomatic influence he can' to ensure the mountainous, low-tax country ceases to exist.

The two men have been close since 2004 when Mr Blair decided British oil interests were more important than keeping your distance from terrorist psychopaths.

He said: "Muhammar is a strong, wise leader of a great people who sit atop billions and billions of gallons of thick, black money. Death to Geneva!"

Colonel Gaddafi has called for Switzerland to be wiped from the face of the Earth after it arrested his ghastly son and made some minor changes to its planning regulations.

He told a crowd in Tripoli: "Let us wage jihad against Swiss planners, excellent time pieces and Toblerone. Oh, and Zionism as well, obviously.

"Any Muslim in any part of the world who eats one of those little triangular pieces of chocolate with the bits of nougat in it is against Muhammad, God and the Koran.

"And no hard, nutty cheeses either. If I catch you eating Emmental I'll fire you out of a cannon."

The Libyan leader then sang Guns'n'Roses' Sweet Child of Mine in a squeaky falsetto and granted the freedom of the city to a bowl of Rice Krispies.

Denys Finch-Hatton, Mr Blair's former foreign policy adviser, said: "Our diplomatic efforts with Gaddafi were about securing valuable British money and restoring Libya to the community of civilised nations. And as you can see it's working like a charm."

Meanwhile Gaddafi was was also backed by the Scottish National Party, his Edinburgh-based fan club, who said they hoped the Lockerbie bomber would be able to perform one last atrocity in the centre of Zurich before he finally dies of cancer three months after he was definitely supposed to.

Sale Of Clooney Villa 'Like A Bereavement', Say Men 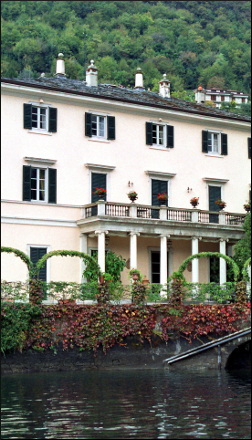 GEORGE Clooney's decision to sell his lakefront Italian villa is like the death of a close friend, men said last night.

Since Clooney bought Villa Oleandra, on the shores of Lake Como in 2002, millions of men around the world have taken comfort from the idea that at least one of them had got life exactly right.

Professor Henry Brubaker, of the Institute for Studies, said: "There was no jealousy, just a quiet satisfaction that one intrepid adventurer had ascended to the mountaintop and gazed upon the promised land, without being a total dick about it.

Martin Bishop, a man from Hatfield, said: "When other stars were taking drugs and generally treating everyone like shit, George was sitting on his terrace watching the sun slip behind the Italian Alps while pouring a glass of something rather nice for a magnificently beautiful woman.

"And that would be at the end of a day spent planning a funny, intelligent film and scooting around the lake in his vintage motor boat, slugging a few Peronis and exchanging wisecracks with Brad Pitt and Matt Damon."

He added: "These paparazzi are men too. Someone has to tell them what's at stake. If George cannot live, all men will die. You know… on the inside."

Tom Logan, a man from Finsbury Park, said: "When I squeeze myself onto the Northern Line on a cold, wet February morning and spend 35 minutes being drenched in the post-breakfast flatulence of strangers I would drift off and think of George buzzing round the lakeside on his Harley, stopping off for an espresso and making easy small talk with the locals. I would think of the house. The beautiful, beautiful house.

"And now they're saying it's going to be owned by David Beckham. The whiny-voiced beelzebub. The beast with multiple endorsements.