BORIS Johnson has been posted to New Zealand for as long as anyone can justify him being there.

Senior government figures decided it was urgently necessary for the Foreign Secretary to travel 12,000 miles away and to remain there until further notice.

Tory chairman Sir Patrick McLoughlin said: “Boris was mid-sentence at a morning briefing when it suddenly became absolutely essential that he was posted far, far away.

“The moon was considered but you still have to see that, so we reluctantly chose New Zealand on the basis of distance and the unlikelihood of his inadvertently starting a war there.”

Officials in New Zealand have confirmed that they are considering relocating trade talks to Bouvet Island, a tiny speck of land with no permanent human population, for the 40 years it will take to complete them.

Britain’s ambassador to New Zealand said: “It was lovely to see Boris, but early in his stay we realised his pithy, ignorant, borderline racist remarks with allusions to Catullus would be better received on a frozen outcrop thousands of miles from the nearest human being.

“We’re just working on the final details, such as ensuring that all satellite communications can be jammed.” 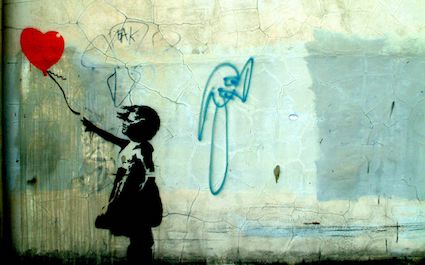 AN ARTWORK by Banksy has been voted the worst kind of bullshit that your middle-class auntie has on coasters.

Banksy’s artwork Balloon Girl, illegally stencilled on a wall in rundown East London in 2002, has within 15 years become the preferred artwork of women who say ‘Oh, sugar drops’ instead of swearing.

Art critic Eleanor Shaw said: “Banksy’s been on a remarkable journey from urban guerilla operating outside the rules to sentimental shite that goes with the Laura Ashley wallpaper in the downstairs loo, but the truth is he was bollocks all along.

“Trite, obvious and painfully twee, Banksy is now the favourite artist of people who don’t like art but sometimes the walls need a bit of cheering up.

“The art world has been exposed as fools. Frankly if Jack Vettriano’s The Singing Butler had been stencilled on dirty walls in rough bits of Bristol we’d have been conned into thinking it edgy as fuck.

“If you have Banksy books or artworks in your home, destroy them before anyone sees. Though you’ll always know now, in your heart, that you’re no better than the rest.”

Your auntie said: “I like that graffitti art. I’ve got a big cock and balls framed over the sofa.”