DAVID Davis has arrived at EU negotiations with a cake that he wants to eat but then still have afterwards.

Brexit minister Davis bought the cake, a low quality Victoria sponge, on the way to his meeting this morning and made sure to not offer it around.

Davis said: “If you’re being literal about it then yeah, I want to have my cake and eat it too, which has nothing to do with Brexit or the EU.

“I’m just a man who wants to be able to eat a cake and then still have the cake afterwards.

EU chief negotiator Michel Barnier added: “I’m pretty sure it had a reduced sticker on it so we weren’t that fussed.

“Anyway he ate all the cake, and now he doesn’t have a cake, although he has the cake box which he insists is the same thing.” 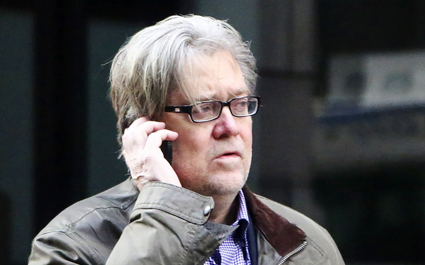 STEVE Bannon called the White House to see if anyone has found a sack containing wild snakes, it has been confirmed.

Former chief strategist Bannon, who was removed from his position on Friday, thought he had gathered all of his belongings but now cannot seem to find his bag of reptiles.

Bannon said: “The sack contains eight snakes of varying colours. You particularly want to avoid the little yellow one which has bitten me several times, although I seem to have some sort of natural immunity.

“I haven’t fed them for a while, but don’t worry too much though as I’m pretty sure I tied the bag up after the last time I spoke to them.

“Also if any stationery has gone missing, it’s nothing to do with me. Laptops, military secrets, that kind of stationery.”

Bannon now looks set to continue his work with the right-wing Breitbart news website: “We are moving our office to this great marshy area under a bridge.

“It’s more of an open air office but the snakes will be happy that they’ll get to go in the water.”