FILES on the President Kennedy assassination opened to the public for the first time today have revealed that he is alive and well in Kentucky.

Newly-declassified files reveal that the former president suffered only minor injuries in the 1963 incident but decided to quit while he was ahead and turn to his true passion, chicken farming.

The centenarian said: “I’m not really the type for fuss, so I just got Air Force One to drop me off on the outskirts of Campbellsville and never looked back.

“I was fully aware that all the stuff that was coming up – Vietnam, civil rights, Medicare – would be deeply unpopular anyway so I left that to Lyndon Johnson. And do people remember him fondly? See?

“Oh, sometimes, when it’s debeaking season, I miss those days in the White House but after the Cuban Missile Crisis I figured I’d done my bit. Bobby joined me in ’68 and we ain’t looked back since.”

He added: “And you’ll never guess who ended up buying the ranch next door. Lee Harvey Oswald, no less. But we settled our differences and we’re now firm friends.” 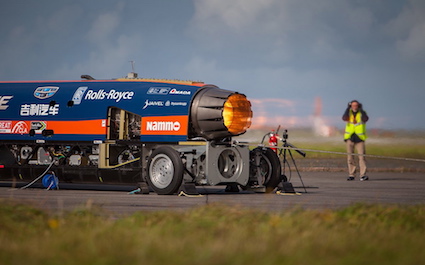 THE Bloodhound rocket car capable of reaching 1,000mph is being tailgated by a man in a BMW 7 series, observers have confirmed.

Trials of the £45 million Bloodhound in Newquay have been hampered by the BMW driver, who is aggressively flashing his lights and gesturing that it should pull over.

“The fins on it. What a joke. Combining a fighter jet, F1 car and space craft? Trying a bit hard, aren’t they? Compensating for something?

“We were all boy racers once but this is 4.4 litres, he’s not going to outrun it. See, he hasn’t even got the balls to put his foot down. All bark no bite.

“I’ll slow down while I’m passing, let him get a look at the alloys. Technically they don’t make me faster, but they should signal to this Bloodhound lad that he’s out of his depth.