EAGER foot collectors are setting up camp on the beaches near Vancouver, amid talk of a new Canadian 'foot rush'.

Not since the 1890s have so many feet been washed ashore in the Pacific north west and now speculators are cashing in on the disembodied foot bonanza.

Sitting among more than a dozen bin liners filled with feet, Wayne Hayes from Oregon, said: "It's not just the quantity, it's the quality. I'll get at least $30 for some of these feet."

He added: "For the first time in a decade, I've got a real chance of finding a matching pair."

Tom Logan, who travelled 2500 miles from Kentucky to stake his claim, said: "Look at that bastard Hayes, sittin' there thinking he's the King o' Feet.

"What he don't know is I gots me a real nice foot in a bright red slingback that still got its ankle bracelet. Hee hee hee."

Fortunes were built on the great Canadian Foot Rush of 1896, when brave, desperate men would battle their way across the Rocky Mountains to grab as many feet as they could from the wild Pacific shoreline.

The experience was captured by Jack London in a series of classic tales including, White Fang, Call of the Wild and A Wagon Full of Feet.

Meanwhile, authorities in British Columbia, baffled by the source of the foot rush, are urging local citizens to count their feet and seek medical advice if they have less than two.

Millions Save Money With Carlsberg Draughtmaster&#8482; 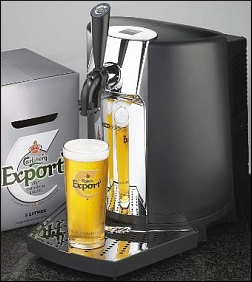 With recession looming shoppers across Britain have been stocking up on emergency supplies of hi-tech gadgets, guaranteed to pay for themselves.

Julian Cook, a trainee accountant from Clapham, said his new Carlsberg Draughtmaster™ would deliver the full experience of being in a pub, but with huge cost savings.

"I picked this up for just £114, which is nothing compared to the cost of a medium-sized pub."

Katie Wilson, an out of work estate agent, said she was saving money with a £125 novelty smoothie maker by the Italian designer Alessi.

"I'm very aware of the constant threat of scurvy and pulped fruit is a hugely important part of my life. That's why I bought a smoothie maker with funny little feet and a jaunty hat."

Wilson added: "I’ve also bought a breadmaker, it's fantastic. I’ve not actually switched it on yet, but as soon as wheat hits $250 a tonne I'm going to crank that baby up, I swear to god."