Hipster seems to have confused Mugabe with Mandela

A HIPSTER is sad about the resignation of Robert Mugabe, who he thinks is Nelson Mandela.

Tom Logan, a ‘short film director’ who also sells rare trainers on the internet, took to social media to hail Mugabe’s role in overthrowing apartheid and uniting people of all races.

Logan posted: “Together with his wife Winnie Mandela, Robert Mugabe was an inspirational force for good, overcoming adversity and imprisonment to win the Nobel Peace Prize. If only more of us could be like Robert Mugabe.

“It’s very worrying that he’s been forced out. People need to ‘get woke’ to what’s happening in Mugabe’s South Africa, the people there may look like they’re ecstatic but that’s only because the new evil government, backed by Trump and the Illuminati, has told them to keep dancing or else.”

Logan, who barely knows what year it is, also confirmed plans to make a dubstep track dedicated to Robert Mugabe, using samples of South Africa instruments and featuring himself doing a rap of Mandela’s most inspirational quotes. 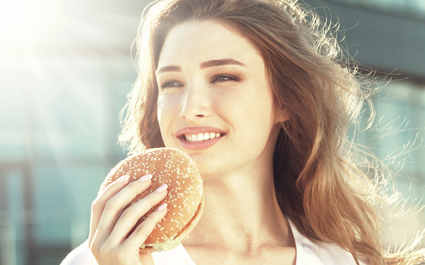 MY NAME’S Nikki and I’m a flexitarian. ‘What’s that?’ I hear you cry, already overwhelmed by how fascinating I am.

Well, it’s some made-up bullshit that allows me to eat loads of succulent animal flesh whilst still claiming the moral high ground.

By chucking around phrases like ‘fluid approach to eating’ and ‘sustainable lifestyle’ I can bamboozle people into thinking that I’m pretty much Buddha, but hotter and more deep, while holding a burger.

Being a flexitarian allows me to say I eat a ‘plant-based’ diet, which sounds like I’m a vegetarian when actually the plants I eat are usually lying limply by the side of a massive oozing steak or squashed under a fat slice of yummy, greasy bacon.

It also enables me to give long, sanctimonious lectures to carnivores about how they’re killing the planet by eating so much meat and still get a KFC bucket on my way home.

It has been pointed out to me that the term ‘flexitarian’ is meaningless. But it’s a science name, like ‘wellness’, ‘yogic’ or ‘trans-dimensional sexual energy vortex’. Einstein probably described himself as a flexitarian.

Flexitarianism has boosted my health even more than when I gave up drugs apart from doing coke every other weekend. It turns out you can have your double bacon cheeseburger and eat it! But also not eat it because it’s bad. Or something.