THE Conservatives have jumped eight points in the polls after tackling the crucial issue of 25-to-30-year-olds’ daytime train fares.

Theresa May lost her majority in June after failing to address the injustice faced by voters aged between 25 and 30 paying up to a third more for off-peak travel than under-25s.

But the shock move in today’s budget means that a 28-year-old travelling from Bournemouth to Warwick could save as £14.30 after the initial £30 railcard cost, condemned by Labour as an “outright electoral bribe”.

“This initiative could save me literally a hundred pounds a year, if it’s a year when I have a lot of weekday weddings that I can’t get lifts to. And that makes tuition fees, the housing crisis, Brexit, rampant inflation, and austerity irrelevant.

“Imagine, saving £11.73 on a return from Didcot Parkway to Bristol Temple Meads. Ker-fucking-ching.” 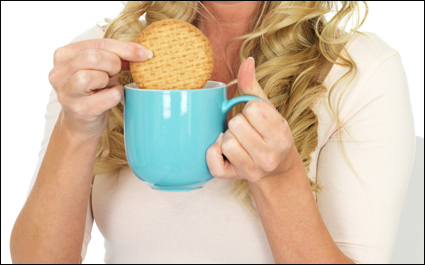 A WOMAN struggling to dunk a biscuit has finally defeated it with a bigger mug.

After several rage-filled minutes, Joanna Kramer went out and spent £1.99 on a larger mug in which she can dunk the digestive-type biscuit without having to take annoying nibbles around its sides.

Kramer said: “I was like ‘just go in the fucking mug’, trying to cram it in there but it was just not possible without breaking it.

“However I would not let the crumbly little dickhead get the better of me.

“I grabbed my coat and headed to B & M Bargains where I bought myself a large blue generic mug in which I could fit an entire giant cookie should the fancy take me.

“While I was in the shop I also picked myself up a giant kitchen roll, a cheap faux fur throw, some clothes pegs and a box of crisps, all for under a tenner, so kiss my ass biscuits.”