THE EU has responded to Britain’s increased exit payment offer by asking for the 132nd time what exactly is the deal with Northern Ireland.

Brexit supporters in the Cabinet have agreed to up the divorce payment to Europe by as much as £20bn, and are now wondering why the response once again includes the words “Good Friday agreement”.

EU negotiator Michel Barnier said: “I do not know how many more ways I can say this. I am going out of my mind.

“Seriously, you know Northern Ireland? Did you know it was one of the countries in the UK? Do you even know now?

“A few years ago, we all worked out this deal to stop them bombing you and each other, and we want to carry that deal on? Yes? You don’t want to be bombed?

“Okay. So great for the money, thanks very much, and next time I see you I expect some ideas on Northern Ireland?

“You haven’t heard a fucking word, have you?”

Brexit secretary David Davis said: “They’re playing hardball. We’re going to have to go all the way to £60 billion. But once we do that, there’s nothing in the way of making a deal.” 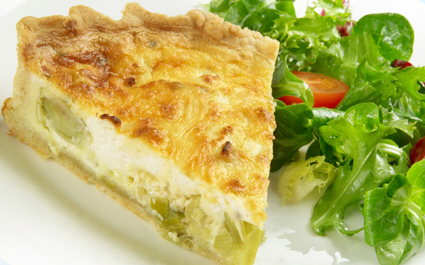 QUICHE is just an underachieving distant relative of pizza, scientists have discovered.

Researchers found that quiche shares 98 per cent of pizza’s genetic material, but has never been sufficiently motivated to become delicious.

Food analyst Emma Bradford said: “Unlike its high-achieving cousin pizza, quiche never really got its act together which is why it is bland, flavourless and chalky.

“There’s clear potential for quiche to become a worthwhile food, but at the moment it’s just too busy sitting on its arse, being a quiche.”

Quiche Joseph Turner said: “I could go out and get a sauce and maybe some anchovies, but to be honest I’d rather stay here on the lower rungs of this pub fridge, being tasteless and pallid.

“I just don’t feel motivated to get better ingredients. Maybe I’m depressed because of the excessive amount of egg I contain, which gives me that greasy unappealing sheen.”