THE captain of the Costa Concordia abandoned his post to buzz around the deck on a Vespa sexually harassing female passengers, it has emerged. As the Italian courts ruled that the disaster was now an official metaphor for their country, it also emerged that Captain Francesco Schettino failed to follow emergency procedures and instead sat around drinking expresso, chain-smoking and inviting panicking women in life-vests to come over and sit on his dick.

Magistrates are also examining claims that when the ship was headed toward the rocks the captain leaned on the ship’s horn, stuck his head out of the side window and screamed at the island of Giglio to get out of the way.

The allegations are not the first to be made against the captain, who in 2009 was reprimanded for idling his ship outside a coastal convent, where he revved its six diesel engines at sexy young novices and suggested they put their fat titties in his mouth.

The same year he was upbraided for refusing to wear regulation maritime uniform, preferring a white wifebeater with Ray-Bans and stonewashed jeans.

Costa Concordia passenger, Francesca Johnson, said: “I saw the captain most days on board and he’d always thrust his hips at me, say ‘This ship? Is mine’.

“Occasionally he could be seen on the bridge where he’d read Gazetta dello Sport while wearing a string vest and gesticulating wildly. I never saw him have anything to do with guiding the ship as such, but he did a delicious pasta sauce.”

Eyewitness accounts suggest the captain at first threatened the rocks the ship struck with vengeance from his ‘Uncle Cesare and his friends who you don’t want to fuck with, eh’ but when he realised the ship was sinking changed sides and claimed he had supported the rocks all along.

Thanks, but we have enough money, say tube drivers 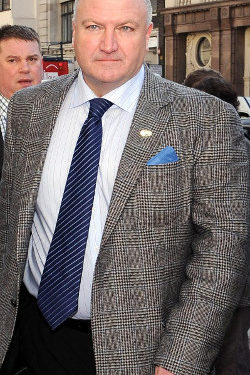 UNDERGROUND train drivers have rejected an offer of some extra money for no reason, because they are fine. Crow says yet another increase in his £145,000 salary would be 'meaningless'

But they have urged the RMT to graciously reject the offer on the grounds that they have no need of additional funds.

Tube driver Stephen Malley said: “I think I would feel, well, awkward about having more money.

“It’s not like I want for anything. I’ve a nice house, a big telly, a Kindle loaded with all the latest train-related thrillers and I enjoy weekly trips to Pizza Express. Anything else would be gilding the lily.”

His colleague Tom Logan agreed: “One of the bonuses of a 37.5 hour working week spent sitting down whle pushing a button is that you get a bit of time to contemplate nature. I guess that’s why we tube drivers tend to be philosophical.

“It may be a cliché, but the best things in life really are free.”

He added: “If you stop and take a moment to admire the intricate petals of a rose blossom, you will realise that nature’s riches glitter more brightly than any man-made wealth.”

RMT general secretary Bob Crow said: “The sentiments of these drivers may be simple but they are true. Their behaviour has left me feeling both humbled and inspired.

“I realise now that just because we are technically ‘working class’ and own Chumbawamba CDs, it doesn’t mean we’re exempt from greed.”

He added: “Look at those swallows flying in formation. That really is exceptionally beautiful.”