DAVID Cameron has offered to show Argentina how to swagger around in someone else’s country properly.

As Argentina requested negotiations on the sovereignty of the Falklands, the increasingly shiny-faced premier asked why they did not just turn up with half a dozen ships filled with musket-carrying soldiers and plans for a railway system.

Cameron told MPs: “Lord Palmerston once described diplomacy as ‘the homosexual foreplay of the irredeemably foreign’.

“Argentina’s attempt at building an empire is the gayest thing I’ve ever seen. If Pitt the Younger had been this poofy Scotland would have been Swedish since the late 18th Century.”

Downing Street sources suggested Cameron is trying to get Argentina to fight back so he can have a bit of a war, arguing that ‘you don’t mess with the classics’.

Tory backbencher Denys Finch-Hatton said: “While the prime minister understands that killing terrified Argentinean conscripts has always made political sense, on a more fundamental level he’s yielding to his ancestral urge to growl at dagoes and sip gin on a veranda.

“It offends his sensibilities to see someone try to construct a reasonable argument about sovereignty when they could just shoot everyone.

“When he was speaking in the House I could see his hand reaching for an invisible swagger stick with which to clout the Argentine president. 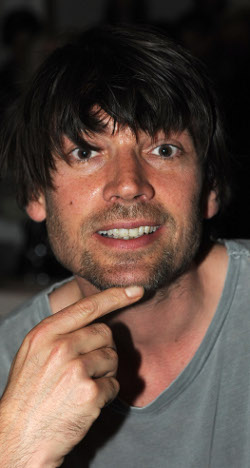 STAFF at McDonald’s have enjoyed their first Bring Your Favourite Britpop Bassist to Work Day.

Roy Hobbs, assistant manager of the McDonald’s in Leicester’s Fosse Shopping Park was the first to take advantage of the new scheme by bringing in Blur’s Alex James.

Alex, nine, said: “My day with McDonald’s was absolutely brilliant. We started at a massive building with lorries sticking out of it.

“When you go to the docks it smells of fish. This was the same but with an overpowering smell of beef – a beefy docks.

“And there’s a huge mince masher which you really don’t want to fall into!”

Alex said he tasted one of the beef burgers and it was really nice. When he grows up he wants to work in a either a McDonald’s or a Michelin starred restaurant but stressed he does not mind which ‘because they are both the same’.

He added: “My day with McDonald’s didn’t put me off eating there at all. I don’t think there’s anything sinister about that.”

Hobbs said: “I was going to bring in Mat Osman from Suede but Alex’s PR lackey was very insistent.

“I actually lobbied for it to be Britpop lead singers because I really want to bring in Louise Wener and show her how clean I am.”

Alex also received a free Muddlepuddle Farm book by Michael Morpurgo about the day a little boy goes to the farm and plays with the happy cows until it is time for them to go to heaven.