Lesbians To Establish Republic Of Lesbia

THE world's 800 million lesbians are to club together and set up their own country.

They are currently scouting locations in Europe and South America where they hope to establish the People's Republic of Lesbia.

A spokesman for Martina Navratilova, the reigning Grand High Lesbian, said: "Lesbia is going to be a really lovely place.

"There will be no need for clothes, and if two girls want to get into a big bath of custard in the middle of the town square and have a bit of tumble then that's cool.

"Apart from that it will be a daily routine of pillow fights, communal showers and rubbing oil into each other's buttocks."

Dimitri Kiriakos, the governor of Lesbos, said: "How can they be Lesbian? I Lesbian, my wife Lesbian, both my sons Lesbian and my cat Lesbian. Even Vince, the local lesbian, is Lesbian."

The International Council of Lesbians decided not to fight the latest legal challenge after their expensive and unsuccessful battle with Mary Poppins star Dick Van Dyke.

I Hate Every Last One Of You, Admits Brown 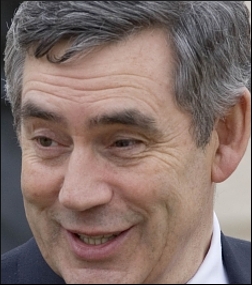 As Labour faced its worst election result in more than 4000 years, Mr Brown confirmed the long-held suspicion that he’s never liked us either.

He said: “It has long been claimed that I am a miserable sociopath who has only ever cared about becoming prime minister.

“Well, guess what? It’s true. Whoop di-fucking-do. Well done Simon Heffer and Quentin Letts, you were right all along. You fat pricks.”

He added: “I tell you what, why don’t we let David Miliband run the country? Or shall we wait until his nuts have dropped?

“What’s that David? Why do all the other men in your office start work that little bit later than you? Well, what happens is, when you’re having your Coco Pops, they have to shave.

“Or what about Ed Balls, you say? Okay, but you’ll have to wait until he’s finished licking mine.”

Mr Brown admitted his body language had often hinted at the depth of his loathing for other human beings, adding: “It’s not just that I don’t like you, it’s that I want to see you torn limb from limb by crazed laboratory chimps.”

The prime minister then left the podium briefly, returning with a wooden pallet, stacked high with phone books.

He then sat down, opened the Aberdeen directory, went straight to the ‘A’ section and began running his finger down the entries, saying ‘hate you’ after each one.