GEORGE Papandreou may be trying to con Europe with the short grift, experts have claimed.

As the Greek prime minister ‘convinced’ his cabinet to back a referendum on a massive bailout, experts said the move was quite clearly designed to scam even more money from the European Union.

Julian Cook, chief scamologist at Donnelly-McPartlin, said: “It’s textbook stuff. You join a single currency and then borrow a sum of money so huge that it endangers the entire system.

“The other countries offer to bail you out because if they don’t then everyone is ruined, but then you wait until the last possible minute and ask for more cash or ‘you’ll have to have a referendum’.

“The other countries know they can’t let you have the referendum unless you’re definitely going to vote ‘yes’ and so they pony up with the dough.

“Meanwhile, those dumb saps at the Daily Telegraph unwittingly help you along by saying it’s ‘a great day for democracy’. Beautiful.”

Nathan Muir, a retired bunco artist, said: “It’s called the Albuquerque Two-Step. Old Mickey Five-Knees used it all the time back in the Forties.

“I wouldn’t be surprised if the whole country’s in on it.

“I’ll tell you what though, this Papandreou guy has got some serious hustle. Between the two of us we could clean up, maybe pick a small town and then go door to door selling shares in a free-range haggis farm.”

He added: “I love the fact the Greeks fired all their top generals at the same time, making everyone think the country is on the brink of a violent military coup.

“It’s the sort of wit and panache that you used to see in this game all the time. These days it’s all just payment protection insurance and homeopathy.” 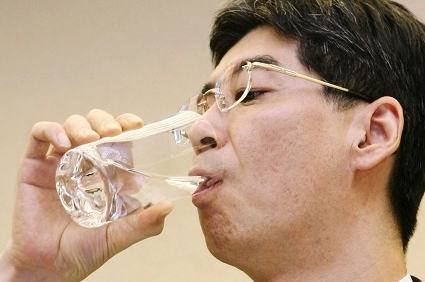