VLADIMIR Putin has erected a 100­ft bronze flipped finger in the middle of Red Square.

The Russian premier and bare­chested bear grappler unveiled the giant obscenity to celebrate another six years of listening very carefully to the will of the people before chuckling mirthlessly and tossing a few of them into a pit.

Putin said: This gleaming swivel-digit will last for a thousand glorious years and be an inspiring beacon of up-­yours for fellow despots everywhere in what have been some difficult times for acting the totalitarian tit.

I want the people of my country to know that wherever there is despair, wherever there is disagreement, wherever voices are heard to cry out oh not this homicidal bald arsehole again, surely?, I will be right behind them, giving them my almighty bird and having them detained indefinitely.

Hundreds of protestors took to the streets of Moscow to demonstrate against Putins inauguration for ten minutes before being beaten up, arrested and detained in the new underground correction centre situated under the giant sculpture.

The jail, already dubbed Fuck-You­lag can process 50 detainees an hour with an automated system asking prisoners if they know exactly who theyre screwing with, before administering electric shocks via a probe shaped like Putins extended finger.

Putin appeared unperturbed by the protests and enjoyed an inauguration dinner that featured amongst its guests Silvio Berlusconi, who was specifically invited to make Putin look more endearing.

He added I want to give the people of Russia democracy, freedom, opportunity and unity  but not half as much as I want to give them this cold metal digit, which they can stick right in their ear. 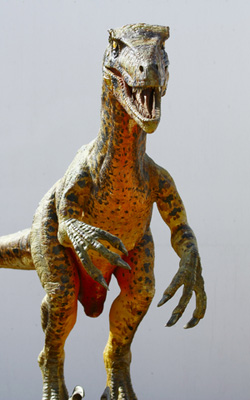 Now energy company researchers have developed a machine that can open a ‘time window’ into the prehistoric era, at the exact moment when a megalosaurus or similar large saurian is about to guff off.

The highly flammable lizard flatus is then captured in specially-reinforced cylinders and transported back to the present day.

Quantum physicist Professor Tom Booker said: In the era of the dinosaurs, the prevalent sound was farting. These immense lizards ate either exclusively plants or meat, they lumbered around letting rip with energy-rich trouser eggs.

“When these great beasts trumped, the ground literally shook.

Were currently researching which is the most potent – the deadly dog food nostril­-burners ripped out by carnivores, or the trumpeting heavier-­than­-air marsh­ bombs chuffed out by the vegetarian sauropods.

The public can be reassured that it is impossible for living dinosaurs to pass through the time window, though my late colleague Dr Hobbs was unfortunately sucked into a brontosaurus while bravely trying to attach a containment pod to its anus.”

Environmental groups say the scheme has numerous risks, from the danger of lethal prehistoric farts escaping into our atmosphere to the fear that even minor changes to the past could affect the present.

A Greenpeace spokesman said: It might not seem that the Bronx cheer of a stegosaurus could affect the future, but history could take a radically different course without that filthy stench in the Triassic air.

Well probably wake up in a parallel world where were all apes and Hitlers won the war, as usual.”