Quarter Of Global Population Can't Get Drunk Or Look At Boobs

A QUARTER of the world's population is unable to have a few sherberts or stare at some knockers they do not already own, according to new research.

The Institute for Studies found that one in four humans is now a no-booze, titty-hater, with 60% of them refusing a nice glass of wine and a copy of Penthouse in Asia.

Of the total no-booze, titty-hating population, around 90% are very opposed to brandy and dumplings, while 10% have an absolutely fanatical hatred of rich, peaty, single malt scotch and the mere thought of a stunning set of charlies all soaped-up and ready for action.

According to the report Iran, Iraq and Pakistan are the countries where you are least likely to find one of those clubs where you can buy big jugs of beer and watch fancy ladies in their pants.

But the report also found that more than 300 million of them live in countries where everyone else likes to get totally steaming and look at all manner of private parts.

The data revealed there were now more no-booze, titty-haters in Germany than in Lebanon, and more in Russia than in Jordan and Libya put together.

The report has been seized on by campaigners who warn that Europe will soon be free of booze and titties and anyone who wants to watch a Russ Meyer film while hammering a few cans of Sweetheart Stout will have their eyes gouged out, their tongue cut off and their John-Thomas thrown to a pack of dogs.

Researcher Nathan Muir said: "The data does suggest the possibility of increased cultural tension in countries with large no-booze, titty-hating communities. Which is a shame because booze and titties are excellent."

But Bill McKay, a vodka fiend who simply cannot get enough knockers, said: "Fear not, little ones.

"In an ever-changing world where our values are constantly under threat, we can be secure in the knowledge that a litre bottle from Asda and a well-thumbed La Senza catalogue will always prevail."

Being Mental Now A Career Option 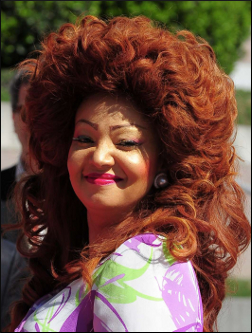 THE government is to pay the unemployed to hang around shopping centres pretending to be clinically insane, it emerged last night.

Ministers want to exploit the full potential of Britain's worldwide reputation for potentially dangerous eccentrics who loiter outside shops, clutching kitchen utensils and muttering about the fish-headed ones.

A spokesman for the department for employment and learning said: "After the success of our scheme to pay genuinely mentally ill people £15 a week to take their pills, something went 'ping!'.

"You can never have enough oddballs. So why not take people out of the dole queues and pay them to act a prawn ring short of a buffet for eight hours a day? They are a huge tourist draw and enrich the country's cultural fabric."

Former farm manager Roy Hobbs has recently taken up a £24,000 a year position as lunacy facilitator at Swindon's Brunel Centre.

He said: "My job is to sit in a wheelchair wearing one of those comedy hats that looks like it's got a knife through it, brandishing a wooden lizard at passers-by in a way that's simultaneously threatening and pitiful.

"Once a week I get to work from home calling local radio stations and asking the presenters in a very loud voice if they want to come in my helicopter so I can cut their hair."

Meanwhile ex-cab driver Wayne Hayes now makes up to £80 per day as a freelance 'square peg' for Birmingham City Council.

Mr Hayes said: "My main role is to go into Habitat-type shops and pull my tracksuit bottoms down. I then wander around with my arse and balls on display, nonchalantly examining curtain rails like I haven't a care in the world."

He added: "It's a great job but it's difficult to switch off and I often catch myself naked from the waist down at family functions."