BRITAIN has woken up relieved to find its idiotic act of self-harm earlier this year is now a piffling historical footnote.

Across the UK, Britons are secretly delighted that when the great disasters of 2016 are remembered, Brexit will be completely overshadowed by America’s embrace of fascism.

Mary Fisher, from Croydon, said: “Wow. Like obviously bad for them, but what a total save for us.

“We’re the person who’s sick in the garden early on at the party, spends an hour thinking they’re an embarrassment, and then someone vomits explosively all over the leather couch and the new carpet.

“Brexit’s nothing now. All we’ve done is get out of the EU before their decade-long war with Russia.”

Historian Dr Helen Archer said: “For months we’ve been the world’s dumbest dickheads, and now we’re actually if anything a useful marker on the road to the total collapse of liberal democracy.

“I mean end of the world, obviously, but every cloud.”

Of course Americans are stupid enough to do this, say experts 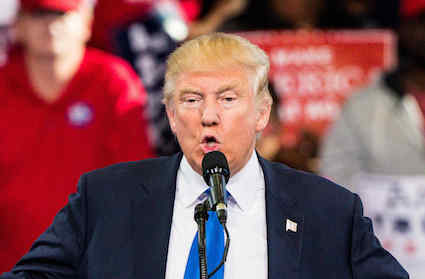 EXPERTS have stressed that of course America is genuinely stupid enough to elect a deranged murder clown as its president.

Professor Henry Brubaker, from the Institute for Studies, said: “The question ‘are Americans really stupid enough to do this?’ is, in itself, fairly idiotic.

“In recent years, thanks to some very well made television programmes like Breaking Bad and House of Cards, we may have led ourselves to believe that America is more intelligent than it actually is.

“More than half the population believes in some form of creationism. More. Than. Half.

“Meanwhile, many of them are unable to locate their own state on a map, never mind large, well known foreign countries.

“And then there’s the guns. So many fucking guns. It’s how a great many of them define themselves. That is not a good thing to do with your brain.”

He added: “Anyway, have a lovely evening.”