AMERICANS have vaguely heard there are other cultures but believe it just rumour. Here’s what they lose their shit about in the UK:

Every single American drives an automatic car while in Britain automatic cars are regarded with suspicion and fear. So US tourists struggle with a clutch, while Brits abroad are giddy with excitement that they’ve hired an automatic and they have a fortnight without all that f**king about.

It’s a staggeringly simple concept – pull out when the coast is clear, drive clockwise until you reach the exit you want, use your indicators unless you’re a BMW or van driver. Visiting Americans have been unable to cope with them for half a century. They can invade Iraq but they’d never take Milton Kenyes.

Americans seem perplexed at a perverted system of healthcare that means you can get seriously ill and not lose your house. Brits, meanwhile, are astonished to find out that American doctors ask permission from insurance companies to save a life. And do not get it.

One tap’s boiling hot and one’s freezing cold; the two-tap system makes absolutely no sense to us either. But it’s British, so anyone who dares criticise it is bang out of order. Mixer taps are the devil’s work and only seen in the homes of the despised middle-classes.

Americans hate tea with a passion. They hate it so much they threw it in Boston harbour and started a war with us, even though we’re great. However this has convinced them that all British people drink tea constantly, so they’re freaked out when we order coffee.

Great if you like to pretend you’re cooking, Yanks make out like beans on toast are dog turds on a cow pat. This is a bit rich coming from the nation that gave the world cheese in a spray can, Pop Tarts and early-onset diabetes.

The idea of a policeman without a service weapon is laughable to US citizens convinced that only bullets stand between them and their certain murder. But be suspected of a crime and you’ll find our able police can hospitalise or even kill with no guns at all. What a win for Britain.

Nick Knowles, and other celebrities proper blokes would have a beer with 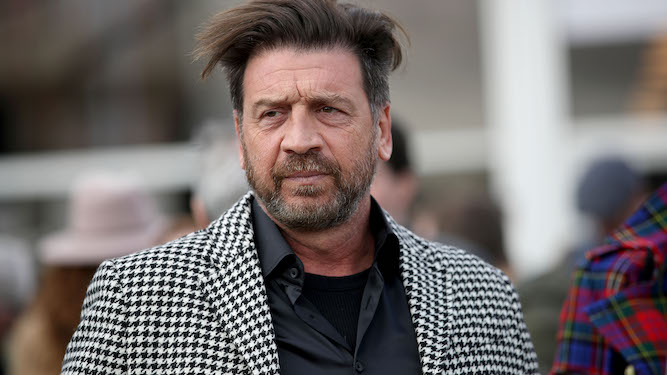 TOO much of a ruddy bloke for ponces like Daniel Craig? Want to share a few silent moments of macho silence with a real man? MMA fan Roy Hobbs advises looking no further than these six:

Reality TV is for girls or men who wear slip-on shoes, except DIY SOS. Knowlesy’s gravelly Cockney tones and general aura of ‘come on let’s have ya’ mean you’d have a right testosterone-heavy night down the pub. Women discussed but not necessary.

Technically an actor, but reassuringly can’t act. Refuses to sign up for a movie unless his character gets to punch people, crash expensive cars and shag birds. Would no doubt candidly compare the bedroom talents of Kelly Brook and Rosie Huntington-Whiteley if asked.

Serious footballing hardman Vinnie also appears in films without deigning to do any silly pretending. If I ever see his massive head down my local, you bet I’m going to buy him a pint and it’ll be unspoken but clear there’s nothing gay about that.

He’s never been in a blockbuster movie but singlehandedly won World War Two, so you’ve got to hand it to him. And that hand would probably be throwing up two fingers and smoking a cigar, because he’s a f**king legend.

He might speak Latin and have a secret French surname, but he’s still a lad’s lad at heart. No way would the yawning gulf in class be awkward or he’d rather be talking about poncey art to a girl called Ravennacieza. He’s banter.

Top Gear? They Think It’s All Over? Blind drunk in a pedalo? A real favourite with the ladies? No way would anyone call you a puff if you were hammering pints with Freddie. Then afterwards you could go back to his place.