Six great reasons for Brexiters to join the army immediately

WAR with shifty foreign tyrant Putin is on the way, so it’s time for all those gammons who defeated Hitler by voting Leave to enlist. Here’s six reasons to volunteer:

You can finally walk the walk

You’ve been replaying D-Day in your mind for decades, and now’s your chance to live it. Imagine the thrill of dodging real live ammo fired by trained Russian soldiers instead of watching GB News in your underpants. Make your imaginary grandad in the RAF proud.

In the war films you adore, Jerries drop like flies after a quick burst from your Sten. All the chaps respect each other, and there’s the bonus of boning hotties like Mary Ure from Where Eagles Dare. There’s no chance war will be brief, terrifying and you’ll get your feet blown off.

You’re made of sterner stuff

You’re not technically a soldier yet, but you don’t need soft civilian luxuries like nice food, a comfy bed and the sidebar slags of Mail Online. You’d rather be in a barracks full of farting blokes or sleeping in a freezing dugout in Kharkov. This is going to rock!

WW2 was a magical time of sing-songs and community spirit. You’d lend a neighbour your last sliver of lard and young people had discipline. Let’s go back to that. They’ll be cheering out of the windows of your new-build cul-de-sac when you return home having whipped the Russian bear.

It’ll piss off the EU

Britain’s coming to Europe’s rescue – again. So stick that up your unelected gallic arse, Michel Barnier. And when you get back to Blighty you can give all the Remoaners a white feather. It’s going to be even more fun than Poppy Day.

You were born to kill

You’ve always known that, if you’d not been written off by school, you’d be a natural in the SAS. Or the Paras. Or a Navy SEAL. So you’re hardly going to pass up the chance to be a real soldier up against brutal Russian commandos, are you? Oh, there’s a vaccine requirement and you’re a free-born Englishman so you can’t? Such a shame. 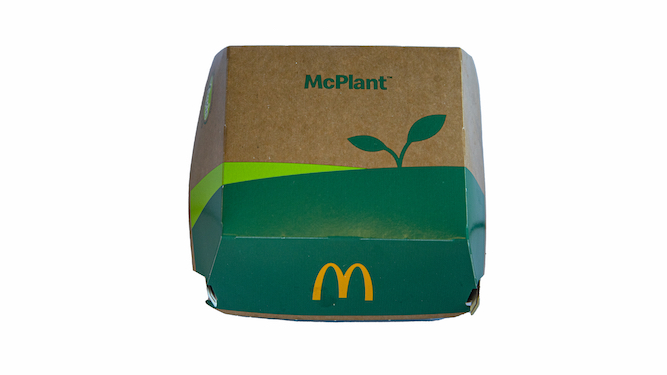 The McPlant burger consists of a meat-substitute patty, a slice of vegan cheese, mustard, pickles and the classic McDonalds air-and-polystyrene bun.

A spokesman explained: “We wanted to offer vegans something that delivers the same taste you would expect from a normal burger, which is to say sordid and repugnant.

“The provenance of the ‘meat’ element is even more mysterious than our reclaimed-arsehole burgers and adding plastic vegan cheese makes it truly unpalatable. You’ll be burping this one for days.

“We’re delighted to welcome vegans into our restaurants where they can be served by our resentful three-star workers before quickly and miserably consuming their food in an brightly-lit environment full of screaming children.

“McDonald’s is for everyone. Come on a Saturday night, there’s fights.”

Vegan Sophie Rodriguez said: “The Greggs vegan sausage roll makes me feel cheap and used, but it does at least taste nice.

“After eating the McPlant burger I felt degraded, humiliated and like I had let my parents down. But only for 30 minutes. Then I went back for another one.”