Someone Claiming To Be Me Has Been Saying It&#8217;s All Your Fault, Brown Tells America

GORDON Brown yesterday told America that someone has been going around blaming them for the global economic collapse and using his name.

In a keynote speech to the US Congress Mr Brown said he was 'shocked, shocked I tell you' to discover that a man claiming to be the British prime minister has used every possible opportunity over the last 12 months to lay the blame squarely at America's door.

The prime minister said: "He goes on television and says 'the economic crisis originated in America and then spread across the globe'. That's his catchphrase. But get this, right, the caption at the bottom of the screen says 'Gordon Brown, Prime Minister'.

"And I'm just sitting there watching it, thinking 'bloody cheek!'. And then I go into the office and everyone's saying 'good interview, prime minister' and I'm like, 'for fuck's sake, it wasn't me, okay?'.

"Granted, he does look a bit like me and the voice isn't bad, but the way you can spot the difference is that horrible, creepy smile. I don't smile like that. Look."

To a standing ovation Mr Brown added: "I like you. No, I mean I really like you. A lot.

"Sometimes I think about the two of us having dinner and we talk about all the stuff we have in common and then we move over to the sofa and I run my hand up the inside of your thigh and our eyes meet and we lean into each other and then all of a sudden we're just doing it.

"I need you. I need your hot breath on my neck. I want to lick every inch of you. I want to feel your urgent hands investing in my naked, heaving buttocks.

Britney May As Well Be A Corpse Puppet, Say Fans 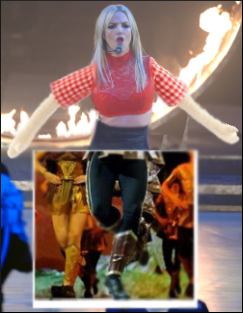 BRITNEY Spears kicked off her first major tour in five years with a larynx-free performance that was no better than a dancing corpse puppet, angry fans said last night.

Concert goers said the star's lower lip and chin performed extremely well but were disappointed she had chosen not to use her lungs.

Throughout the show Spears was strapped to a trolley which was manouvered around the stage by a series of ropes and pullies while a pair of dancing legs was projected onto a whiteboard covering the lower half of her body.

Meanwhile the pop princess's hands were tied behind her back as two large, rag doll arms, sown into her costume, flailed manically as she was jerked rapidly from side to side.

There was a brief technical hitch during the second half when the twitching legs of Riverdance star Michael Flatley were projected onto the whiteboard by mistake.

But despite having her head strapped to a metal pole the star was able to move her lips in synch to the music while a potent cocktail of amphetamine was pumped into the base of her spine in a bid to keep her eyes open.

Nancy added: "She's not as good as the Pussycat Dolls. Daddy's taken me to see them 14 times."

Not all Britney's fans were disappointed, however. Bill McKay, 44, from Houston, said: "It was an amazing, life-enhancing performance if your life happens to revolve around fantasies about a 27-year old substance-abusing, mother of two dressed up as jailbait."