SYRIA is to outsource its evil plotting to North Korea in a £3 billion deal to create the world's biggest terror brand.

The Middle Eastern rogue state will employ 300 sinister looking Asiatics at a nuclear facility in the Deir ez-Zor Governorate on a diabolical plan to wipe Israel from the face of the earth.

Meanwhile, 100 specially trained Syrians will travel to North Korea to train its population to look even more terrifyingly insane on television than they do already.

Bashar al-Assad, the president of Syria, said: "We explored a number of strategic options but only North Korea offered the vertical synergies necessary to make the numbers stack up.

"The Koreans impressed us with their bottom-up approach and evil lust for blood, while offering us a client-focused and holistic solution to all our terror needs which was premier league."

Kim Jong-il, Heavenly Supreme Commander of the Korean People’s Army, said: "This merger of two of the strongest names in world terror will create a results driven, customer facing force for evil without the need for major downsizing.

"While we are the global number one at looking stony faced and menacing, they are world leaders in goggle-eyed public insanity and firing guns into the air."

Bill McKay, a terror analyst at Institute for Studies, said: "Jesus H Christ. Get me a spade, three tonnes of ready-made concrete and 6000 cans of baked beans." 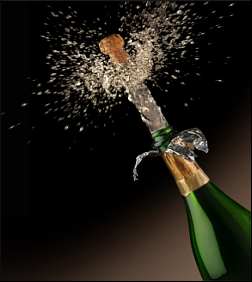 BANKS in the UK were fucked yesterday, after a landmark court ruling.

A High Court judge said the Office of Fair Trading can now take a good, long run-up at the banks and fuck them into the middle of next week.

Coming hard on the heels of the sub-prime loan crisis, the industry is now bracing itself for a shafting of absolutely humongous proportions.

Mr Justice Smith stressed his judgement did not necessarily mean the banks deserved to be fucked, but warned that a comprehensive humping was all but inevitable.

Julian Cook, an analyst at Donnelly-McPartlin, said: "Remember that bit in Raiders of the Lost Ark when the big, baldy German guy is punching Indiana Jones and then turns round to see the propellers coming straight towards him? That's how fucked they are."

Meanwhile, millions of account holders are looking forward to playing their part in fucking the banks.

Tom Logan, a sales executive from Lincoln, said: "They've been charging me £35 every time I go 20p overdrawn and then using my money to buy peice-of-shit American mortgages.

"There are simply no words to describe how much I am going to enjoy fucking them."

Bank chief executives last night demanded an urgent meeting with the chancellor to ask if there is anything he can do to prevent the imminent fuck-fest.

A Treasury spokesman said: "Holy shit, they're even more fucked than us."