US televangelist Pat Robertson has branded the Pope a dangerous liberal and challenged him to prove his Christian credentials in a televised Jew-hating contest.

Robertson told the audience of his popular 700 Club talk show that despite being Pope for nearly three years the Pontiff had not once attacked the deniers of Christ in public.

He also branded him weak on homosexuality, pointing out that his opposition to same-sex marriage stopped short of advocating that all gays be drowned in their own urine.

Robertson said: "Where in the speeches and writings of this so-called holy man is there any reference to the well documented cases of baby eating by Jews?

"Has he ever written a book revealing how the Jew controls the world’s financial system and has taken us to war on every occasion for their own profit?

"Has he revealed to you, my poor brothers and sisters, just who it is that profits from the current financial crisis which is hitting advertising revenues on even the most god-fearing of television channels?

"Did he dictate to Mel Gibson, in person, the dialogue for his documentary The Passion of Christ? And did he, after seeing the first version, tell Gibson to do it all again because the Jews in his film were just not evil enough?"

A spokesman for the Vatican said: "Was Pat Robertson in the Hitler Youth? Thought not. Thank you and good night."

Prince William To Use HMS Invincible As A Bottle Opener 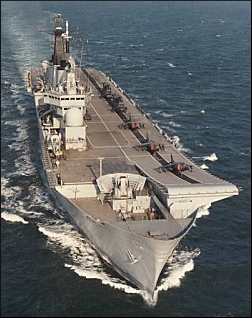 PRINCE William has been given permission to use the aircraft carrier HMS Invincible as a bottle opener at his summer barbecues.

The Prince will install the 194m long, 22,000 tonne vessel in the grounds of Highgrove House, just in time for his 26th birthday party at the end of June.

Once in position, next to the barbecue patio, Invincible will be fitted with a small, standard issue bottle opener on the starboard side, below the water line.

It is the latest military asset to be loaned to the young Prince, whose late night, RAF Tornado 'fag runs' have become a fixture on London's Fulham Road.

The Prince has been keen to involve the armed forces in every area of his life and has already replaced his bed in Clarence House with a complex assembly of 12 lance corporals from the Queen's Royal Hussars.

Meanwhile the dining chairs in his central London apartments are volunteers from the Brigade of Ghurkas, squatting on their haunches for up to 16 hours without a break.

Military expert Denys Finch-Hatton said: "These Ghurkas leave their villages in Nepal and hike through the Himalayas for a week to reach the recruiting office in Katmandu where they sign up to become dining chairs for the future King of England."

A Ministry of Defence spokesman said: "It's all standard practice. Last year more than 500 officers completed their flight training by piloting a Chinook helicopter to London, picking up their brother and then flying it to a stag do on the Isle of Wight."