Trump believes his predecessor was conned by Kirtsie Allsopp and Phil Spencer into selling the Grosvenor Square embassy for ‘peanuts’ thanks to the pair’s undervaluation of the property.

He continued: “The nanny girl and the sex pervert completely conned Obama, who knows nothing about real estate because he wasted his time in politics, and he fell for their British lies like a dog!

“Sold a beautiful embassy which I would have made into an extremely successful hotel because he was afraid she would give him a ‘spanking’! Sad!”

The president has demanded that the presenters be hung, drawn and quartered in front of him on his official state visit, because he knows that Britain still does that sort of thing.

Barack Obama admitted: “They show you so many properties and talk about how much money you’ll make and by the end of the show you’re so bamboozled you’ll agree to anything.

“Also, I was dumb thinking I could project manage the build of the new embassy myself, without any experience. Kevin warned me about that.” 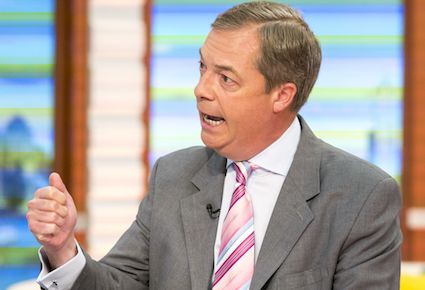 NIGEL Farage has backed a second Brexit referendum or anything else that will make him relevant again.

The former UKIP leader spoke out after realising the only TV interview he had been offered today was The Wright Stuff on something called ‘Channel 5’.

He said: “If the only way to settle the argument of whether I am a minor political figure or a world-bestriding statesman is a second referendum, then I am prepared to support it.

“There will be no complicated choices. The British people will be asked to pick between hard Brexit, a return to medieval values and Nigel Farage as president-for-life, or being wrong.

“I am confident, given the assurances I have received from Moscow, that the result will be even more of a landslide than the previous 52 per cent landslide.

“Then, finally, we will kill off any speculation that I am not the greatest figure of British history for a generation.”

The show then heard from caller Bill McKay of Taunton, who wanted to know why his council could not complete their simple task of collecting the bins.