DONALD Trump has demanded that a Super Double Caps Lock be created to better convey the force of his feelings on Twitter.

Trump believes that computer keyboards need a new key to represent how emphatic and powerful his words are.

A White House spokesman said: “When the president typed ‘SEE YOU IN COURT!’ it was commanding, impressive and resolute.

“But unfortunately YouTube commenters calling pop videos ‘THE GAYMOST’ have lessened the impact of capital letters, meaning the tweet came across as impotent rage from a bewildered adult baby.

“Super Double Caps Lock will leave the world in awe with a series of epochal tweets about his daughter’s shoe line and a fabric softener commercial he feels is disrespecting him.”

Joe Turner, from Kansas City, said: “Has he tried using a whole bunch of exclamation marks? That always makes everyone take me seriously.”

Before you go, can you explain what the f**k the deal is with your hair? 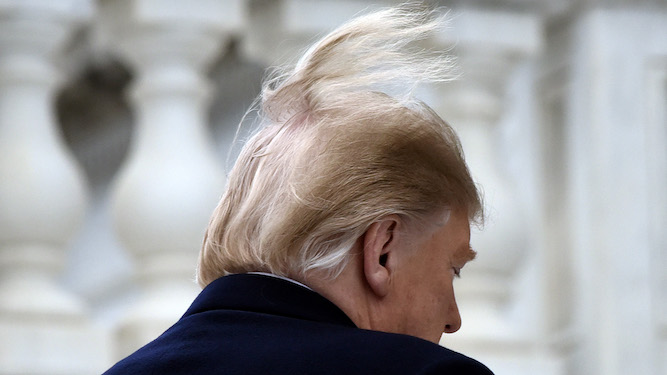 AMERICA has asked Trump if he can do it a favour before he pisses off and explain what the f**k is going on with his hair.

Following his loss to Joe Biden, the country has decided that as Trump is pretty much the most humiliated he will ever be, he might as well admit the truth about his whole coiffure situation.

Jordan Gardner of Tenessee said: “Like, we get that you’re bald. But how do you get from that to this?

“Is it all your hair, in which case it must be insanely long? Like four feet long? Or is it hair from monkeys or orphans or the dead or something?

“Also, while we’re asking, what’s going on with your face? The whole orange deal, apart from the white eyes? Do you put that make-up on every day? Why?

“Come on, dude, you’re already looking the maximum dick after this whole campaign. Just tell us the honest truth about what the deal is with that freaky shit. Then f**k off.”

Melania Trump, on her way back to Slovenia, said: “Yeah, what is that? I don’t know. I’ve never been alone in a room with him.”