PRESIDENT Trump has generously granted the world a 24-hour break from his onslaught of lunatic behaviour.

Across the world, people are waking up to find no news of unhinged executive orders, deranged calls to world leaders or beserk Twitter threats and are overwhelmed with relief.

Nathan Muir of Stockton-on-Tees said: “This is better than Christmas.

“I hadn’t realised how accustomed I’d become to checking the doom device, as I call my phone now, half-asleep then spending all day weighed down by the burden of whatever the psychopath leading the free world had done now.

“Instead I’ve got a spring in my step, a smile on my face, and who knows I might make it to the end of the day without my head in my hands murmuring ‘Oh God oh God we’re all going to die’.”

Muir added: “It’s war tomorrow, I imagine. I’ll just enjoy the break while I can.” 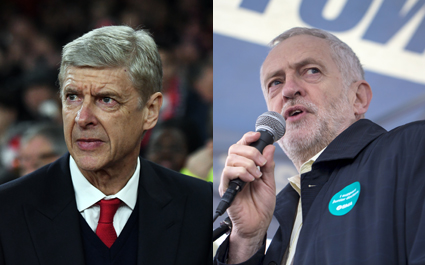 The year-long experiment will see Corbyn don Wenger’s ‘very hungry caterpillar’ anorak in the Arsenal dugout, while Wenger will grow a beard to face Theresa May across the despatch box.

A Labour spokesman said: “Mr Wenger has already pledged that Labour will finish in the top four of every by-election while he is in charge.

“He also plans to bring in a number of European politicians into the party who will be ideally suited to travel up to Stoke or Burnley on a cold February weekday night and perform fantastically well, so long as they are wearing gloves.”

“If Arsenal relocated from the Emirates Stadium to their original home of Plumstead Common, with jumpers for goalposts and laced footballs, they would regain the sense of purpose they lost under New Arsenal from the 1920s onwards.

“Supporters would pour out in their droves, believe me.”