DONALD Trump has employed theoretical physicists to create infinite lines of taste and decency he can eventually cross.

Presenting the findings as if they were all his own work, Trump said ‘wormholes’ would allow him to cross multiple lines in multiple places, simultaneously.

He added: “I could be in Washington saying something about some bitch TV reporter while at the same time I’m at a rally in Michigan calling Matt Damon a Communist faggot. Win!

“The implications are truly staggering and could mean that by this time next year I may be saying something heinous about disabled people every .002 seconds. So great.”

Meanwhile, Trump has ordered NASA to build an inter-dimensional spaceship so he can visit alternate universes to play golf and swap horrible, disgusting notes with the other Trumps.

NASA engineer Tom Holland said: “We’ll have to utilise the force of his ego to break through the fabric between realities, as well as building a seat strong enough to accommodate his enormous ass.

“Have you seen it? It looks like a sleeping bag full of sausages.”

What the hell is this 'prom' bullshit? asks everyone over 30 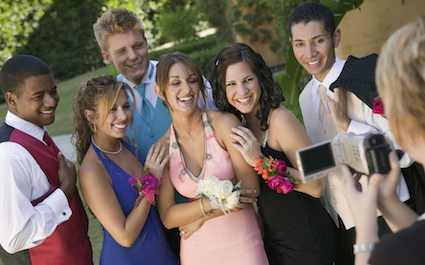 ANYONE aged 30 or over is having difficulty accepting that school leavers now get to go to a big prom, they have confirmed.

With proms having become the norm for all 16 to 18-year-olds, older people have found themselves confused as to when this happened and whether they are glad or angry that they missed it.

Tom Booker, aged 43, said: “We didn’t have a prom. We had a school disco, and after I’d done the lambada with Kerry Pennington the geography teacher insisted on stepping in for the next dance, then he got off with her after.

“We were lucky to have that. At rural schools, after everyone had signed each other’s shirts, they just got shitfaced in a field.

“Now it’s all big dresses and limousines and losing your virginity with all the excessive ceremony of the Lord Mayor cutting a ribbon. Did I miss out, or was I lucky?”

18-year-old Nikki Hollis said: “It’s such a marvellous occasion, everybody dressed up together, a real rite of passage from childhood to becoming an adult.

“Then we make the least popular girl in the school prom queen and dump a bucket of pig’s blood on her head.”