UK to intervene on both sides of Syria conflict

BRITAIN is to simultaneously help both sides in Syria’s bloody civil war, it has emerged.

The Foreign Office cited Assad’s strong trading links with the UK and his nice-looking British wife as the reason to stand by him, and the regimes brutal repression and shelling of civilians as the moral case for backing the rebels.

Foreign Secretary William Hague said: We also need cheap crude oil for multinational businesses who may deign to give us a tiny slice of their profits in tax, but at the same time UK voters are starting to notice the rampant destruction now the football’s over.

“People at home are watching reports and getting increasingly concerned the conflict may escalate to special ‘war news’ and spill over into other telly like TOWIE.

“So we’ve divvied things up, with the Assad regime getting the air support and the tracksuit-clad rebels getting the arms to shoot them down with.

Prime Minister David Cameron said: This is the kind of diplomatic brilliance that my brand of compassionate conservatism brings to the international stage.

Can any of us really say that we understand an Arab regime, with all those Sunnis and Shias and so on? Whats important is that we act decisively. 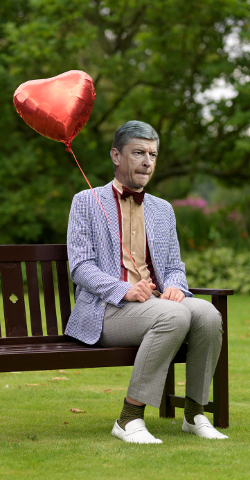 ARSENE Wenger has revealed Arsenals entire kit cost him just £200 from the Highbury branch of Tesco.

The frugal trophy-dodger has insisted that expenditure has nothing to do with winning trophies and feels his decision to get the players to compete in black plimsolls rather than expensive boots will have no adverse effect on results.

Wenger said: These new kits are just the same as the pricey ones only they havent got some fancy logo on them to hike up the cost.

“As I keep reminding the squad, its not a bloody fashion parade. Tesco didnt have any tops left in red but black doesnt show up the muck as much so its probably for the best.

The waste of money in this game is absolutely shocking – I cant believe the amount we chucked away on that isotonic rubbish last season when theres a tap full of perfectly good water in the changing rooms. From now on anything over a tenner has to be okayed by me.”

The clubs fixtures for the 2012/13 season have been handed to the firm Megabus to calculate the cheapest fares to the Emirates. Wenger himself has spent several evenings on the Easyjet website looking at deals for their European matches.

Fans have questioned the austerity drive, pointing to the £300M Wenger has in the clubs ISA account.

When asked why the season ticket prices have steadily risen to the equivalent cost of a two-bedroom flat overlooking the ground, without any of the money being spent on the squad, Wenger made vague references to the prices of heating and lighting the stadium before changing the subject.

Wenger added: Ive never held with being a flash Harry myself, so the players can go and live with that Mr Mancini if thats the kind of thing they want, which this letter Ive got from Van Persie seems to suggest they do.