US fears Trump may discover emojis

AMERICA fears it may just be a matter of time before President Trump discovers the emoji keyboard on his phone.

White House staff believe that once the 70-year-old realises he can communicate with happy, sad and crying laughing faces he will abandon English altogether.

Chief of staff Reince Priebus said: “He already struggles with words. What’ll happen when, like a McDonald’s employee, he discovers pictures are all he needs?

“We may be facing the first presidency delivered entirely in gift wrappings, champagne corks and cocktail glasses, which the courts will be powerless to rule against.” 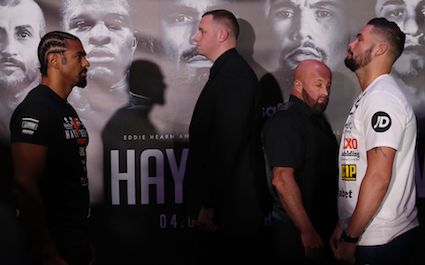 DAVID Haye and Tony Bellew, both fully grown adults, are unable to settle an argument about who is toughest without resorting to violence.

Yesterday’s press conference caused widespread disappointment as the men were unable to amicably resolve their difference of opinion about who could hit the other harder.

Promoter Eddie Hearn said: “It’s sad that it has come to this.

“I for one had hoped to broker a more elegant solution, but instead it looks like they’ll be scrapping like a pair of kids in the playground.

“I don’t think anybody really wants to see David and Tony come to blows, but with a heavy heart I’ve booked the O2 Arena and sold the pay-per-view rights to Sky.”

He added: “If only they could get over their silly feud they’d realise how much they have in common, like punching people and bragging about it.

“Perhaps this fight will knock some sense into them and they’ll realise violence is wrong.”