THE Vatican really did have no knowledge of the Nazi's systematic extermination of Jews during World War II, it was claimed last night.

As Father Raniero Cantalamessa, Pope Benedict's personal preacher, compared criticism of the Pontiff to anti-semitic violence, experts said the Vatican's long-standing claims of ignorance over the holocaust may not be such an obvious lie after all.

Historian Tom Logan, said: "Maybe they think the Nazis just criticised the Jews very, very harshly to the point where some of them fainted and bumped their heads.

"Or perhaps they were so distracted by the personal nature of the Nazi's verbal attacks that they forgot to put their slippers on and banged their toe on the leg of a coffee table.

"Then again that can hurt quite a lot, so I'm still not sure it's a valid comparison."

Logan added: "It's odd that the Pope would be so fuzzy about anti-semitism, because I'm pretty sure that as a member of the Hitler Youth he would have had to earn some sort of badge for doing it really, really well."

Nathan Muir, professor of European History at Reading University, said: "When someone compares something to anti-semitic violence you always expect them to finish the sentence with, 'except for the death factories and the six million murders of course'.

"But in this instance, either he's dropped the piece of paper that said that, or the Vatican really doesn't know about the holocaust. 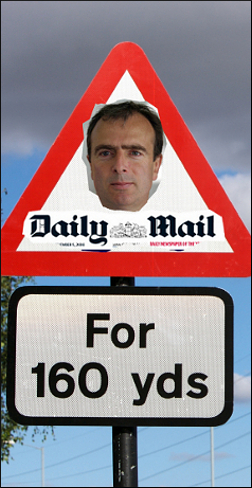 POLICE in Kent have removed a makeshift sign that warned drivers and pedestrians about nearby Daily Mail readers.

The sign was erected by Tom Logan, from Ashford, who wanted to protect strangers and passing motorists from talking to any of his neighbours by accident.

He said: "I moved here about three months ago and noticed fairly quickly that there was a huge number of Daily Mail readers in the street.

"At first you assume it's an oversight or a budget thing and that eventually the council will come along and remove them, but weeks went by and nothing was done.

"I realised it was actually quite dangerous having so many of them so close together, especially if a motorist asked for directions and suddenly found themselves talking to some arsehole who thinks Eichmann had the right idea about gypsies.

"Then they start asking how many abortions you had before deciding to bring another socialist homo into the world and tell your wife that if she has a full-time job then she may as well just drop her child into a disused mineshaft."

Kent County Council said it has removed 45,600 Daily Mail readers from 1,595 streets since the beginning of the year but admitted it was still a huge problem.

A spokesman said: "Unfortunately we cannot allow members of the public to put up their own warning signs, whether they are for Daily Mail readers, giant, armoured bin rats or level Richard and Judy crossings."

Mr Logan added: "I stole the sign from near a school, painted the middle bit white and then added the masthead and a big photograph of an idiot that I cut out of the Daily Mail.

"I thought it was quite good."