THE first of the trapped Chilean miners brought to the surface have admitted that four of their colleagues were delicious.

The jubilant miners hugged their families and shouted for joy before quietly informing the rescuers they would only need to do 29 trips.

Florencio Avalos, trapped for 64 days, said: “We were just going to keep quiet about it and hope no-one noticed. ‘Oh no, there was only 29 of us, why would you think there was 33?’. But we kind of realised you had probably been through the list a couple of times.

“Then we thought about saying they were eaten by a dragon, but then there would be this whole big dragon finding expedition and when it came back empty handed eventually someone would start asking lots of awkward questions. Particularly as we’ve all gained a bit of weight.

“So eventually we thought, best just to come clean straight away so everyone can move on with their lives and we need never speak of it again.”

Bolivian Carlos Mamani added: “All we had was these biscuits. After the first 12 hours I was like, ‘these are just rubbish’ and so I hit Manuel over the head with a big rock and made some sausages.

“It’s okay, he was a terrible racist.”

Mamani said the other three dishes were all racist child molesters who stole food and water and had eventually begged to be made into stew, burgers and a really lovely slow-roasted shift supervisor.

“The sense of unity and togetherness down there was amazing. No-one said ‘this is too spicy for me’ or ‘I don’t like chins’, we all just eat who was put in front of us.”

He added: “I would like Tobey Maguire to play me in the film please.”

Gap Abandons Plan To Use Swastika 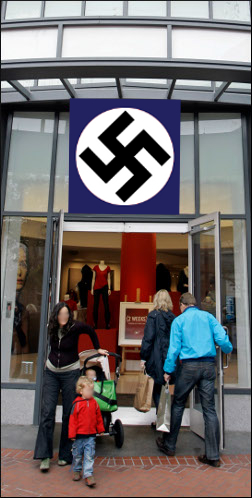 CLOTHING giant Gap was last night forced to abandon its plan to replace its classic blue square logo with the swastika.

The company was inundated with thousands of complaints via Facebook and Twitter as furious customers said there was nothing wrong with the original logo.

A spokesman said: “Our intentions were good. We wanted to refresh our brand using new colours in a bold way that reflected not only our belief in the power of design but also our insatiable desire to kill millions of people and establish a thousand year reich where proud Aryan men can wear chinos at the beach.

“But we have always believed in listening to our customers even if this online campaign was so obviously organised by Zionists.

“Congratulations Jew, you have won this round.”

Brand consultant Wayne Hayes stressed that if Gap had used the internet to consult its customer base beforehand they may have been able to implement a version of the swastika or something similar.

He said: “If it was me I would have asked a question like ‘we want to change our logo to something that reflects the pure hatred and murderous violence in our hearts – should it be a swastika or the SS skull and crossbones insignia?’.

“That way the customer feels they are involved in the process and are therefore more accepting of change. Some people would have resisted no matter what, but I suspect that most would have signed up to to the swastika concept, though they probably would have wanted to keep that signature shade of blue.”

Gap logo campaign organiser, Helen Archer, said: “The Gap logo is the single most important thing in my life. If you even dream about changing it I will devote every second I have to hunting you down and then making you watch as I boil your private parts and then eat them with chopsticks.

“What is a swastika anyway?”