We will not think any less of you if you back out now, humanity tells Trump

BILLIONS of humans have reassured Donald Trump that it’s totally fine if he wants to change his mind about becoming president.

Briton Tom Logan said: “Being president is probably a total nightmare, there’s going to be loads of admin which I’m sure is not Donald’s sort of thing at all.

“It’s stressful too, a man could get a stomach ulcer or some blood pressure type thing. Or his genitals might just fall off, that can happen when you’re tired.

“If Donald wants to step back, even at this late stage, I would not judge him. In a way it’s the more manly thing to do.”

Pascale Lambert of Paris said: “I wouldn’t want all that pressure, or the thought of possibly having a panic attack at spontaneously urinating at the inauguration in front of billions of people. Also it’s a terrible job if you hate germs because you have to shake so many hands.

“People change their minds about things all the time. I bought some expensive cheese once and I didn’t like it so I took it back to the shop and they were fine about it.

Shit-flinging gibbon to be crowned emperor 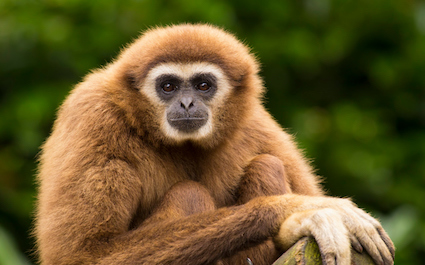 A SCREECHING, orange, shit-flinging gibbon will be crowned ruler of the free world later today.

The ape, incapable of reasoned thought and prone to viciously attack humans, will be sworn in as US president on a Bible it could never read and will immediately attempt to eat.

Once President, the gibbon will urinate on Chief Justice Roberts, attack a female bystander and then defecate in its hands and throw it at the crowd while shrieking incoherently.

Susan Traherne, who came all the way from Nevada to see the ape, said: “At his rallies he leaps into the crowd and sexually assaults women, and boy if he does that today, wow. I hope he picks me.”

After the foaming-at-the-mouth gibbon is dragged off stage by its handlers, it will be shown into the White House and given the nuclear codes.