WITH Saint David’s Day in full swing, the Welsh have privately admitted their language is not catching on as much as they hoped.

In between their national pastimes of looking at daffodils and wearing leeks, the proud Welsh-speakers of Wales have confessed that their native tongue has failed to spread globally to become the world’s second language as they had originally intended.

Llanelli resident Dafydd Llewellyn said: “They speak English everywhere. Spanish is massive in the US. French is a smash in Canada. Brazil’s wild for Portuguese. Meanwhile Welsh evaporates halfway across the Severn Bridge.

“Okay, it’s not that user-friendly, but it’s hardly Mandarin. We put translations on all our signs, what more do you want? But still people live here for years and only know ‘araf’ and ‘heddlu’.

“Once the English stopped violently repressing it, I had every confidence it’d spread like wildfire and become the dominant language of the whole planet. But no-one even learns it to follow Pobol y Cwm.

“It’s disappointing, I’ll admit that. But I suppose it means we can still use it to call tourists pricks in pubs.”

Nikki Hollis of Chester said: “All those ys and ls? No thanks. The sooner it goes extinct like Cornish, the better.”

Why this whole Ukraine invasion thing is a scam to claim asylum, by Priti Patel 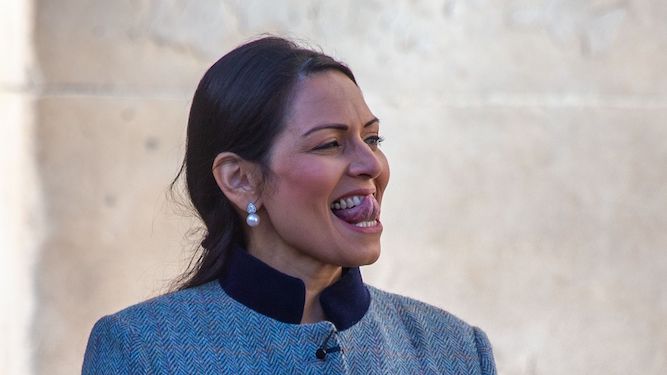 RUSSIA invading Ukraine? Millions of refugees? In desperate need of urgent help? And you’ve fallen for that, have you?

That’s why I’m home secretary. Because I alone recognise that this entire Ukraine business is nothing more than a staged scam to get on the British benefits train.

Had you even heard of the Ukraine before this? I haven’t, and I attended Keele University. They invent countries all the time over in Eastern Europe. So that’s dubious.

And I know plenty of Russians – they call by the office all the time, needing passports for this or that mistress – and they’re a very courteous, generous people. The tip jar’s overflowing. They wouldn’t be so crass as to invade.

But a few explosions on the news and suddenly there’s a ‘refugee crisis’ and they’ve all had to abandon their worldly possessions and come here. How convenient for them.

So I’m just supposed to take it on trust that these people were professors or engineers or whatever back in ‘Kyiv’ and let them in? When they’ve as good as said they consider themselves above honest work harvesting gooseberries?

Plus it would be racist. I already get that all the time just for not giving black people who’ve ‘lived here’ for ’40 years’ ‘compensation’ for being ‘wrongly deported’. I’m not letting in a load of dirty whites now. They’d blend in. You’d never catch them.

This entire war is manufactured so millions of deadbeats can live high on the Universal Credit hog. Well let the EU be the fools. You think Priti’s stupid? Think again.