Why Are My Eyes Leaking? Asks Hillary

DEMOCRATIC presidential candidate Hillary Clinton walked out of a campaign event in New Hampshire after small amounts of salty water began leaking from her eyes.

Senator Clinton was taking part in a town hall question and answer session with local voters when she suddenly stopped speaking and looked desperately towards her aides.

The former first lady pointed to her face and seemed to mouth the words, 'what the hell is happening?' before leaving the room.

The incident came just seconds after Clinton had been asked what she would do if she saw a man shouting at a kitten.

The Clinton campaign brushed off the incident on the eve of the crucial primary, but opponents said it was further proof that the New York senator's face does not have what it takes to be president.

Democrat front-runner Senator Barak Obama, said: "I'm very sorry to hear about Senator Clinton's leaking face and my wife and I hope it is now fixed.

"But the American people have a right to know how their president will react if he sees a man shouting at a kitten.

"I want to assure people that I would not stand idly by while kittens are verbally abused."

A Clinton campaign spokesman said: "The Senator is fine. She has been examined by a doctor and we think it may have been an allergic reaction.

"She's been eating a lot of cheese recently." 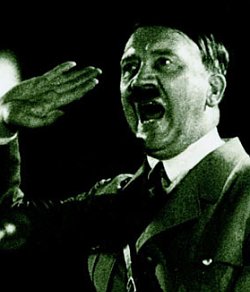 WAR is perfect for soothing away the niggling aches and strains of modern life, the British Army said last night.

Major General Charles Stanley, head of guns at the War Institute, said anyone who liked a quiet game of cards or even just a little light wrestling would be well suited to army life.

He said: “War is a great cure for a bit of mild depression, in fact in 1916 if you went to the doctors complaining of the vapours he would have sent you straight off to the Somme for a rest cure. That’s something we forget today.

“It is true that there are occasional casualties. All that running around, shouting 'bang' does obviously have its risks and we do see the odd sprained ankle, much like in the Scouts.

“But most of our lads are tough enough to take it, and they enjoy the communal showering immensely. None of them ever come home in a box. Why on earth would they?”

According to the Army’s latest recruitment literature World War II was a bloodless affair resolved by a fairly tense game of chess between Adolf Hitler and Sir Winston Churchill.

Some harsh words were exchanged when it appeared the Nazi dictator was staring manically at Churchill in an attempt to put him off his moves.

But both men shook hands as Churchill triumphed and the Nazis agreed to hand back Europe to its rightful owners and refrain from any further atrocities.

However, the Army’s claims are in direct contradiction of the latest research by the Alan Rowntree Foundation which claims war is a highly dangerous activity that can, in the worse case scenario, lead to participants being shot at.

According to the Foundation soldiers are often killed during conflicts, and not always by their own side.