AN ADORABLE couple have posted a gorgeous, in-the-moment selfie that only took 89 attempts to get.

Nikki Hollis posted the supposedly candid shot of her and partner Tom on a beach gazing at a sunset, with a series of hashtags that did not reference the miserable hour the image took to create.

She said: “It’s such a beautiful picture. We’re both laughing and gazing off into the distance, as if we’re contemplating all the joys and adventures we have ahead.

“In reality, we were really pissed off with each other because it was a massive pain in the ar*e to get. I had to balance the camera on a rock, then run back and try look serene rather than like I’d just skidded into position and twisted my ankle.

“And then there was Tom’s face. For about 45 minutes, he seemed unable to do any other expression than ‘constipated’.”

The final shot prompted widespread eye-rolling among the couple’s friends but, crucially, 35 likes on Instagram and 63 on Facebook.

Hollis added: “We are now well into the planning stage of our next ‘natural’ shot.”

Woman doesn't understand film despite talking all the way through it 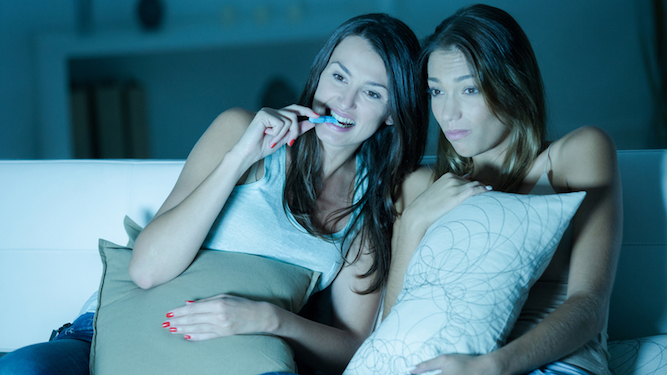 A WOMAN has no idea what happened in the film she watched with a friend, despite asking questions throughout.

When not searching on her phone for a synopsis of the plot, Emma Bradford pestered friend Donna Sheridan with queries about The Irishman, including ‘Why is it so bloody long?’

Sheridan said: “I wanted a relaxing evening watching Netflix, but with Emma present it was as much fun as explaining the intricacies of organised crime to a toddler.

“She was mercifully quiet when I thought she was reading the Wikipedia page about it, but it turned out she’d stumbled across a video of a pig having a bath.

“By the time she tuned in again she’d missed even more. Eventually I switched it off, otherwise our friendship would have ended there and then with me punching her in the face.”

Bradford said: “A pig having a bath is categorically more entertaining than Robert De Niro mumbling in a nursing home.”