Dad wants to know how much it cost

A FATHER has remained silent during his daughter’s story of a new purchase before ominously asking how much she paid for it.

27-year-old Lucy Parry admitted that she had been both expecting and dreading the question because she knows it could only lead to the conclusion that it could have been obtained cheaper.

She said: “I asked Dad how he was, and how the lawn was, and he asked me how work was going, and we both knew all we were doing was avoiding the elephant in the room.

“Then, his eyes alive with nervous energy, he said ‘How much was this new American-style fridge your mum’s so impressed with, then?’

“I told him. He said ‘How much?’ so I had to tell him again. He sucked air through his teeth then vanished to my old room, where they keep the PC, to find out how badly I’d messed it up this time.

“Within 40 minutes he was down, ignoring Mum’s interjections of ‘Leave it, Brian,’ telling me it was £120 less than that on Very even new and if I’d gone second-hand I could have paid half that. I accepted this, as is my role.”

Brian Parry said: “I was put on this earth to tell people they’ve paid too much for stuff. But they won’t listen.” 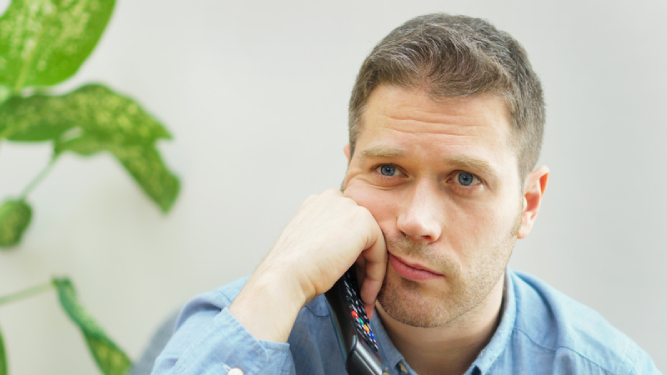 A MAN who claims to hate Doctor Who is going to spend the evening watching every second of it.

33-year-old fan Joshua Hudson has not enjoyed sitting through an episode of Doctor Who since the one where Peter Capaldi punched a wall, yet he will watch the new series out of a misguided sense of obligation.

Hudson said: “I can’t believe I’m going to be glued to this crap. Nobody’s forcing me to watch it, but once you’ve stupidly built your whole identity around a television show then you don’t have a choice. The die’s been cast.

“I predict it’ll be a formulaic episode where the Doctor and her friends defeat the Cybermen with the help of a famous historical figure like Ted Heath, all while slipping in a clunky political message for the intended audience of children.

“Will I enjoy it? No. Will I do something I actually like with my life? No. Will I record lengthy YouTube videos unpacking everything I hate about the new episode? Too f**king right I will.”

Logging into the Gallifrey Base forum to write a scathing review, he added: “The effects will be terrible, the plot will rely too much on continuity, and the acting will be piss-poor. I hope the BBC never cancels it.”