A DRESS labelled ‘dry clean only’ has been given its fourth Febreze before being worn for another night out.

The intricately-sequinned Joseph dress, which has been worn on four different evenings out already, has been treated to a quick squirt of the fabric freshener and pronounced ‘fine’.

Owner Nikki Hollis said: “This dress was expensive, so I don’t want to ruin it by disobeying the instructions. But it’s too late to get it to the dry-cleaners so I’ll just wear it filthy and pretend it’s not.

“I’ve sponged off the really obvious stains and given it a good dousing with Febreze, so it’s basically as good as new. Nobody’s going to be leaning in and sniffing.

“After tonight I’ll definitely take it to the dry-cleaners, even though I resent the cost and don’t really understand or trust how they work.”

The underlying fug of Hollis’s dress, clearly detectable in the taxi there, will gradually be replaced by new odours over the course of the evening including korma, gin cocktail, cigar smoke and the desperation of a man grinding against it on a crowded dancefloor.

The dress will then be Fabrezed and worn one more time before being replaced with a new dress for the Christmas party season, because dry-cleaning is too much trouble.

Woman hopefully placing stuff on stairs for family to take up even though it never, ever happens 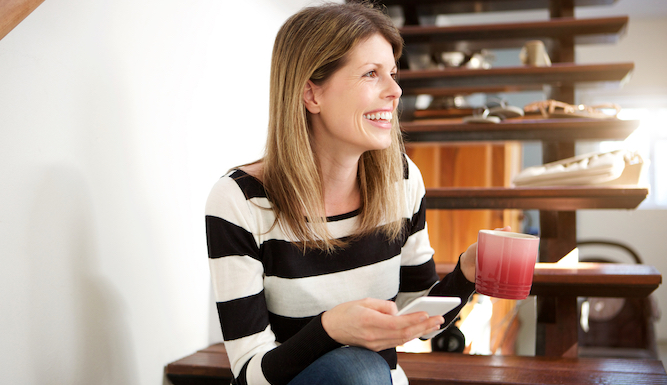 A MOTHER who has spent years putting things on the stairs for her family to take up with them cannot stop even though it has never once happened in 15 years.

Carolyn Ryan admitted her ritual of carefully placing items on the side of a step, with a her husband, son and daughter each having their own designated stair, is an act of faith in a God she knows will never answer her prayers.

She continued: “They leave everything they own lying about the house like a bomb went off at a particularly low-grade car boot sale. So I gather it up and place it on the stairs and they ignore it.

“They’re always up and down the stairs, thundering about, going to their rooms. It’d be no trouble at all for them to grab their stuff on the way. But they don’t. Eventually I put them away myself.

“I’m doing the same thing over and over again and expecting different results. It’s the textbook definition of insanity, but the only other options are I accept my lot as an unpaid housemaid for selfish scum or I move out.”

She added: “I’ve actually seen a nice cheap flat down the road.”