Grandmother doing whatever the f**k she wants

A GRANDMOTHER has confirmed that she has reached an age where socially accepted standards of behaviour no longer apply to her.

82-year-old Ethel Booker’s hobbies include very slowly jaywalking across busy roads, chatting up the 20-year-old gardener and loudly saying disgusting, unthinkable things in public, just because she can.

She said: “What nobody tells you about growing old is that traffic just stops for you. Nobody wants to be the guy who ran over a little old lady.

“I can also ogle Tom, the handsome gardener while he works, and shout things like ‘show me your cock’. If anyone says anything I just burst into tears and say he reminds me of my late husband.”

Granddaughter Emma Booker said: “The other day we went for afternoon tea and Granny ordered a ‘lemon turd.’ When I corrected her, she replied: ‘I know what I said’.

“I’m happy she’s having fun, but I do wish she’d stop loudly telling random passers-by that they’re all fucking arseholes.”

Why I wish I’d listened to that careers advisor, by Theresa May 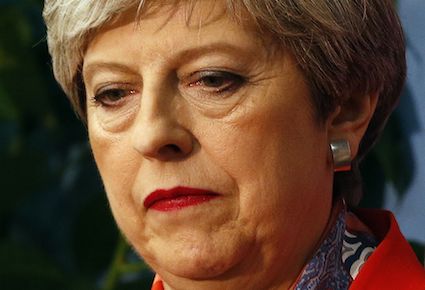 WHEN I told the school career’s advisor I’d like to be prime minister, they laughed and said I was more suited to being an undertaker. How I wish I had done that instead.

But I ignored their advice and pursued a career in politics. Though having about as much emotional depth as a slice of wet ham would no doubt have been a plus in the embalming room, the lure of greatness was too much.

But now filling decomposing chest cavities with formaldehyde sounds like it would offer a lot more job satisfaction than trying to manage Brexit.

An endless succession of lifeless cadavers would be better company on a daily basis than Johnson, Gove, Davis and all rest of them. Jacob Rees-Mogg has all the charm and warmth of a dead body, yet is still able to talk, unfortunately. And Arlene Foster is more terrifying close up than even the most mangled corpse could possibly be.

I’m clearly incapable of running a country. Maybe I would be incapable of being an undertaker too. But at least I could just nail the lid of the coffin shut and no one would be able to tell what an almighty mess I’d made.

I don’t think I’m going to get away with that as prime minister.