A MAN outraged about potentially having a comment misconstrued is in no danger of it ever happening.

Wayne Hayes has expressed deep anger over “pandering to girls with hairy armpits” after learning that you should not say whatever you want to whoever you want, whenever you want.

Even though Hayes has not come close to complimenting a member of the opposite sex since 1985, he is still red in the face about losing the option.

He said: “Not that I would, but can I say ‘thanks’ when my wife brings me some toast? Is it still OK for me to think about holding the door for some slow moving Doris, before getting tired and walking off?

“The problem today is that no matter what you do or say, you’re in the wrong. For example, if I were to tell my bus driver that she had ‘nice tits’ someone somewhere would have a problem with it.”

Everyone in office can tell man got laid at weekend 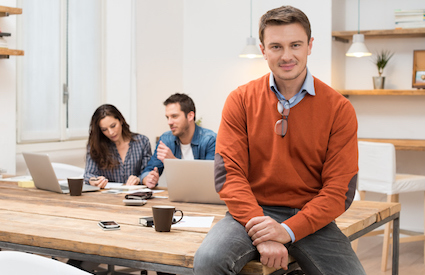 AN entire office is painfully aware that one of their colleagues got it at the weekend, it has been confirmed.

Normally sullen marketing manager Stephen Malley has been offering to make tea, sitting back in his chair, sighing wistfully and checking his reflection while grinning like a tit.

Colleague Helen Archer said: “I shouldn’t be mean because he’s five foot eight and is really into paintball, so it is quite the achievement.

“But he’s so pleased with himself it’s making me nauseous. And the hints he’s dropping. ‘Let’s just say we had a particularly lovely evening’.

Malley said: “Is it me, or does the office seem like a magical, joyous place full of people who thought I would never have sex?”