THE line between being a noble working-class grafter and a footsoldier for right-wing extremism is a thin one. Which side of it are you on?

Do you work hard?

A) I think so. As a self-employed plumber I’ve normally got a busy day checking boilers, replacing pipework and so on.

B) Like a Japanese POW, mate. I’m out in the van first thing intimidating other road users. Then I’ve got to read the headlines in the Sun and have a fag to calm down. After that it’s a hard day haggling over cash-in-hand and mysteriously disappearing to ‘the yard’ for hours.

What are you doing for Poppy Day?

A) I’ve got a poppy for me and one for the van. I’ll observe the silence.

B) Covered my Transit in massive stickers of poppies and silhouettes of British soldiers at the Somme, with ‘Lest we forget’ in Gothic letters, not that there’s any f**king danger of that if I’m around.

How would you describe your political views?

B) I want us on a war footing with the EU like we voted for, and scroungers and lefties should be interned. Solve the immigration problem with machine gun nests and mines on all our beaches. So pretty moderate.

Would you describe yourself as a family man?

B) Too bloody right I am. And if a nonce ever threatened my little ones I wouldn’t be held responsible. The thought tortures me, night and day. I’ve written a letter to Jacob Rees-Mogg.

How do you feel about the Insulate Britain protests?

A) Sympathetic to the cause but they’re helping nobody blocking roads.

B) I’m putting razor-sharp bumpers and spiked tyres on the van this weekend. And a flamethrower. They haven’t reached Loughborough yet but they’re coming.

MOSTLY As: You seem like a decent, hardworking person. Try being permanently outraged about it as if only you have a job and everyone else is on the fiddle.

MOSTLY Bs: You’ve somehow confused having a job and a family with being a borderline fascist. But don’t worry, it’s normal at the moment.

Teletext and other unbearable hardships endured by 90s kids 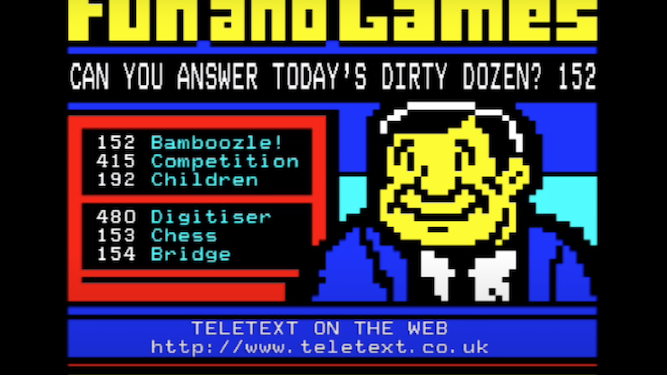 THE nineties weren’t all cheap housing and guilt-free FHM purchases. These are the intolerable hardships kids back then suffered:

The last five minutes of The Weakest Link

Back then if you wanted to catch the good couch bit in the Simpsons intro on BBC2, you were forced to sit through Anne Robinson quizzing a pair of blue-shirted cretins in the head-to-head round. On the worst days it went to sudden death and the punishing ordeal dragged on for an extra 30 seconds. Kids these days are lucky, although The Simpsons is shit now.

Game Boy screens were tiny, impossible to make out because they weren’t backlit, and only displayed various shades of green. Victorian child labourers had it tough in coal mines and shit, but they didn’t give themselves neck cramps playing Amazing Tater.

Want the transfer news? Sit through pages of pixelated bullshit loading at glacial pace. And poor joy-hungry kids struggled to have fun by playing Bamboozle! on page 152. The disappointed face of quizmaster Bamber still appears in their minds when they fail to perform sexually.

Neither young nor naive enough to believe 80s claims about CDs being indestructible, the next generation inherited second-hand copies of Jagged Little Pill that a cartel of coke-importers had used to cut lines on.  For youngsters who lived through this dark decade, 9/11 and Iraq felt like a pleasant change of pace.

The connection speeds were atrocious, you had to listen to the sound of a computer making sweet love to another, and you’d lose your mp3 because Dad needed the landline. Even when you accessed the web there was f**k all on it worth looking at. As an adult, you’d give anything to return to this internet-free golden age.