How to survive a hideous hen weekend in Blackpool

YOU prayed for a nice meal out or a spa day perhaps, but some twat suggested a nightmarish hen weekend in Blackpool. Here’s how to survive it.

Tell the bride her husband-to-be is a wanker

‘Let slip’ that you are not impressed by the fiance. If you’re lucky the bride will tell you to fuck off and you can get the first train home, slip into your PJs and eat your complimentary chocolate cocks in front of Line of Duty.

A radical approach but avoids the added misery of a hangover and regrettable incidents. There is nothing more depressing than puking into a hotel bin while wearing a penis-shaped tiara.

Fake your own death

Hen nights are tricky to get out of. Everyone else has to go so they’ll do everything in their power to take you down with them. The only way to avoid it without pissing anyone off is to fake your own death and start a new life abroad.

Say: “Well done for getting married, but the thought of spending hundreds of pounds on a weekend with a bunch of screeching, pissed-up harpies makes my blood run cold.” There’s a good chance your friends won’t hate you forever because they’re thinking exactly the same thing. 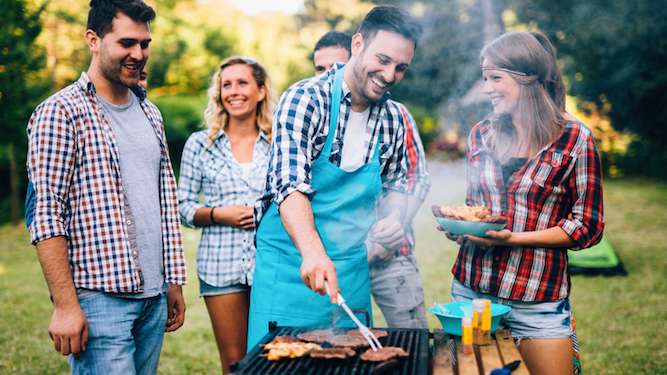 BARBECUE cooking has the same health effects as smoking 20 fags but is nowhere near as cool, it has emerged.

Experts now believe that putting on an apron and burning some sausages not only damages your lungs but also damages your ‘coolness’ by making you look like a twat.

Professor Henry Brubaker of the Institute for Studies said: “We found that barbecues substantially increase the risk of lung cancer while never making you look like Humphrey Bogart or the young Mickey Rourke.

“Next time you’re thinking of inviting friends over for a barbecue, consider sparking up a load of fags instead. You’ll get a real ‘Mad Men’ vibe and there’ll be hardly any clearing up to do.”

The findings are bad news for people who think that soaking a bit of pork in fizzy drink for 12 hours, incinerating it and putting it in a bap is a good use of their time.

Barbecuer Stephen Malley said: “I’ve been standing in front of this barbecue for an hour. My clothes stink, I’m wearing a novelty chef’s hat, and I’m pretty sure I’ve given my whole family diarrhoea.

“On reflection I should have just bought 800 Marlboros and got stuck into them.”