Light-up trainers, and other stupid status symbols from your childhood

THE social hierarchy of your school days was insanely dumb. If you didn’t have any of these items you were at the bottom of the heap.

Nothing commanded respect among a group of eight-year-olds quite like turning up with a sleeve tattoo made entirely of flakey cartoon dinosaur transfers and the odd bit of temporary Transformers ink. The only thing more tragic than blowing all your pocket money on this status symbol was that they washed away come bath time.

The height of sophistication for any child under 10. If you rocked up to the playground in a pair of runners illuminated by flickering LEDs, jaws would hit the rubberised safety floor. You’d be treated like a god until you shorted them out by stepping in a puddle, then it was back to being the runt of the playground.

This beauty combined every child’s love of needlessly hoarding pencil sharpenings with drinks that cause tooth decay. When you slammed this pencil case onto your desk in maths class everyone knew you were the shit, even the teachers. All those cucks had were puny tins that couldn’t even house a 30cm shatterproof ruler. Pathetic.

Your £1 a week pocket money didn’t stretch to real jewellery, but it could afford necklaces and bracelets made out of flavourless sugary pellets. Candy was the real currency of the schoolyard anyway, so when you turned up decked out in your sweet shop bling you essentially owned the place. Try not to think about how that day was the highlight of your life.

When your class made the leap from pencils to pens, there’d always be a couple of pretentious pricks who would turn up wielding top-of-the-range fountain pens. These kids would briefly be envied by all, until they accidentally bit into one of their refill cartridges, swallowed a load of ink, and had to spend the afternoon with the school nurse. Serves them right.

How is the new office trainee getting on your tits? 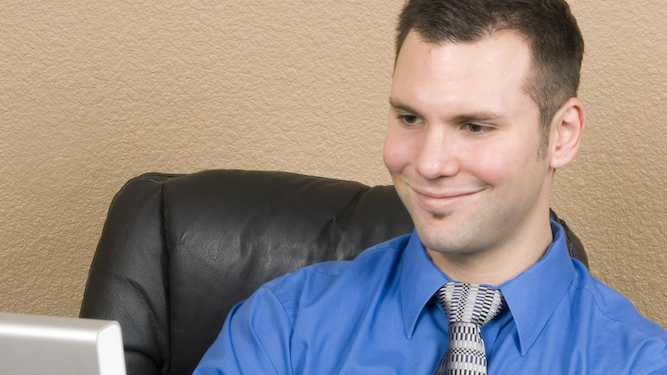 THERE’S a new kid on the block at work and he’s driving you round the f**king pipe. Here’s what the obsequious little twat is up to.

You knock off at 5.30pm with military precision, but this eager-to-please little shit revels in working on ‘just until I’ve got these notes typed up’. He’s already giving you paranoia that you’ve jumped the queue in the next round of redundancies.

‘How does the marketing strategy reflect our brand?’ He’s blatantly currying favour with inane questions your manager will love pompously answering at length. A more pertinent question would be ‘Why does the guy sitting next to me have a bottle of vodka in his desk?’

You’ve only got a shaky grasp of Word, but this baby-faced wanker is a walking software encyclopedia who suggests using all sorts of new-fangled computer programs you’ve never even heard of. You suspect these may be irrelevant or impractical, but he’s still making you look like Benny from Crossroads.

He wants to start an office suggestions box

He thinks it’d be a brilliant idea for people to post their blue-sky-thinking ideas in a poxy cardboard box – and your corporate plodder boss thinks it’s genius. Now you’ve got to think up something innovative and you’ve never done that in your life. Your best idea of ‘Asking Josh if he wants to f**k off’ somehow isn’t going to cut it.

He’s unilaterally decided Friday is ‘cakes day’ and brings in a Tupperware box full of sugary goodies. You wonder which is most annoying: the way he always offers the boss first dibs, the brown-nosing crawler, or the fact that they’re actually f**king delicious.

You’d forgotten the naive, overconfident, enthusiastic twat who joined all those years ago. Christ, that was you. The new guy will hopefully soon be as miserable as you, but deep down you know he’s destined to climb the career ladder like a rat up a drainpipe and in a year or two he’ll be your f**king boss.