A MAN has admitted he only goes to the cinema to indulge in righteous fury at the prices.

Martin Bishop insisted his outrage was far more satisfying than a beautifully crafted story about sexual awakening, or watching comic book characters kick each other in the chest for two hours.

He added: “Much like a superhero film, it is somewhat formulaic, but I enjoy it tremendously.

“Ten quid for three hours parking. How do these sons of bitches sleep at night? Like babies, that’s how. Because they’re evil.

“Twelve fucking quid for a ticket. Utter bastards. Perhaps it would be cheaper if the actors – who do sod all anyway, it’s all just CGI – were paid five million instead 10 million. Arseholes.

“And I have to pay extra for a big comfy seat just to watch Robert Downey Jr wank it out one more time and then get all po-faced when people don’t appreciate him as a fucking ‘artist’.

“And then there’s the fizzy drinks and the popcorn. I will not rest until I know the profit margin on that bollocks.

“It’s a really good night out.” 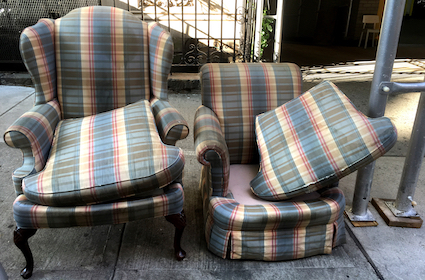 PICKING up stuff that people have left outside their houses is an enormous risk.

One person’s landfill may be another’s treasure – and it’s free. But are you just dragging bed bugs and weird old shit into your home? Here’s our guide to doing it right.

You are not going to repaint it
You can tell yourself that you’re going to sand down that dresser, give it a paint job and create a shabby chic masterpiece, but it will never happen. It’s just a chipped old dresser full of dead spiders. You may eventually get round to removing the spiders.

You are not going to get a VHS player
Oh look, it’s the entire VHS collection of Star Trek: The Next Generation. It doesn’t matter. You will never see a VHS player again in your life. Walk away. Make it so.

Books are fine
Some twat is switching to Kindle-only? More books for you! But beware: however highbrow the collection seems, it will definitely include the autobiography of a retired footballer, a collection of unfunny quotes and at least one of the Fifty Shades abominations.

Mattresses are never fine
Unless you happen to be doing a PhD in fungal biology. Otherwise… have you lost your mind?