A MAN has admitted he regrets building his entire identity around his large waxed moustache.

Jack Browne of Bristol has an impressive moustache along with moustache-themed clothing, home decor, dinnerware and a host of moustache-grooming products, most of which are now largely redundant.

He said: “It’s really an impressive moustache. People used to say that to me. Now I say it to myself, in the mirror, trying to hold back tears.

“The thing is, having a physical attribute that people remark on was as good as a personality in the old world. In lockdown, it’s just a comedy Zoom filter that you can’t remove.

“My tins of Captain Fawcett’s Expedition Strength Moustache Wax sit unused, because what’s the point? But not bothering waxing means it’s all droopy and sad and gets Marmite on it.

“Moustaches probably won’t be in when lockdown ends. But if I shave it off, who even am I? I wouldn’t know who I was anymore.”

Girlfriend Hannah Tomlinson said: “He thinks he’s in the shit? I’ve got a f**king moustache tattooed on my index finger.”

Nutella found in every area of child and house 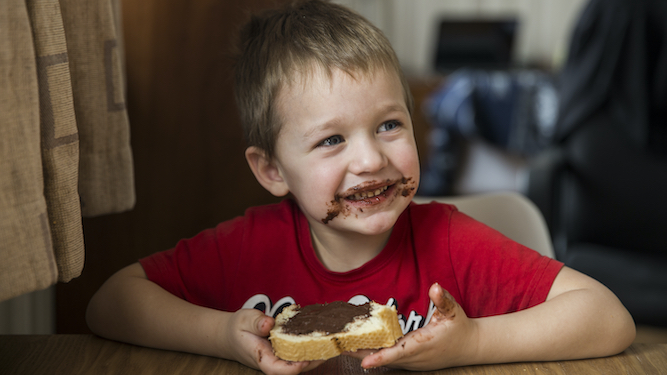 EVERY area of both a child and the house he lives in has been found to be covered in Nutella, his parents have confirmed.

Four-year-old Oliver O’Connor has liberally smeared the sweet and sticky hazelnut spread on all surfaces of his home and body, including his own head, the cat and inside the DVD player.

Oliver’s mum Sophie said: “Have you ever found chocolate spread coming from a child’s nostrils? Coating his inner ear? I have. I even found some between his toes even though he was wearing socks the whole time. Explain that.

“The house hasn’t fared any better. I think I’ve cleaned it all, and then I find a whole new patch somewhere weird like on top of the fridge or in a closed and locked drawer.

“I once read that after you kill a man, no matter how hard you scrub, the blood will never come off your hands. Turns out it’s exactly the same with Nutella. If not worse.”