Parents with small children going on holiday because they're insane

PARENTS with toddlers are leaving under their own volition for a summer holiday of nerve-shredding anxiety because they are out of their minds.

Nikki and Tom Hollis are willingly spending two weeks in foreign surrounds negotiating a minefield of potential toddler hazards under the guise of a ‘relaxing break’.

Nikki Hollis said: “We survived the 10 hour car journey by having ‘wheels on the bus’ on constant rotation which did have a slight effect on Tom who gnawed through his seatbelt.

“We’ve been chillaxing with a glass of Rose whilst keeping on a military level high alert for the open pool, dangerous reptiles and sun exposure.

“Tomorrow we’re going on a boat trip to see all the beautiful scenery with one eye whilst the other is permanently trained on the two toddlers trying to jump over the side or pull an old woman’s pants down.”

Nikki’s mother Betty said: “When we had kids we didn’t go to cafes and we certainly did go on holidays with little children because it just wasn’t part of the culture but mainly because you would have to be off your fucking nut to do it.” 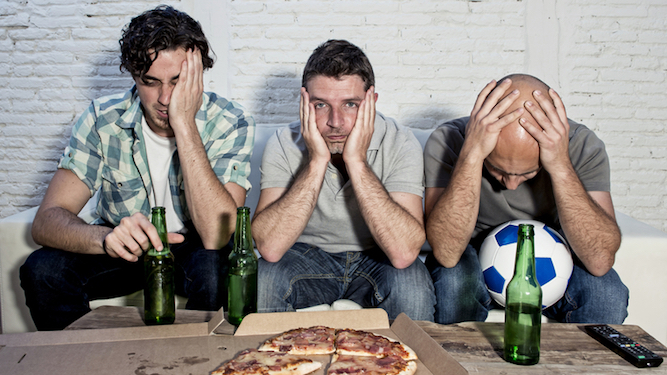 THE start of the new football season has led football fans to try new ways of subjecting themselves to pain and misery.

Supporters have wondered if there are quicker and easier ways of experiencing disappointment and upset as their teams fall short of expectations yet again.

Fan Nathan Muir said: “I’ve tried hitting myself in the bollocks with a sock full of snooker balls. It bloody hurts but the pain wears off a lot quicker than following Coventry City.

“During the season I spend hours sitting on the sofa feeling tense and sometimes crying, so I’ve tried recreating that experience by encouraging my girlfriend to have affairs.

“It’s incredibly upsetting but it’ll save me a fortune on a season ticket.”

Aston Villa supporter Norman Steele said: “For me football’s all about the knot of tension in my stomach as my team is yet again unable to string together more than four successive passes.

“Luckily I’ve found I can recreate that sensation by tossing a coin to determine if I should hit myself on the shin with a hammer.”