SLAVISHLY attempting to fit in with your peers is just something pathetic teenagers do, right? Or did you do one of the following things because all your grown-up mates did?

That beard you grew

Men used to be mostly clean-shaven. Then suddenly beards became the fashion, even for beardies ill-suited to it like David Mitchell. Don’t expect anyone to believe you woke up one day in 2017 and spontaneously thought it would be good to look like sailor Action Man.

You were never that into kids. But then your friends started getting them and saying things like, ‘It’s the most amazing thing I’ve ever done!’ Now you suspect this is bollocks and they’re just trying to maintain the parental lie that they’re not the slaves of distinctly mediocre little humans who show their gratitude by being rude twats.

You lost interest in this game based on dull words like ‘mince’ ages ago, but you’re stuck discussing it with various friends. Friends who aren’t quitters like you and have committed relationships and proper jobs like lawyer. Thanks a lot for the reminder you’re a f**king failure, Wordle.

Caring about the environment

You affect concern and dutifully do your recycling, but the truth is you don’t really care, not in the sense of caring about your receding hairline. Who gives a shit if the dolphins die out? You’re never going to see one in Crewe and they’re a bit overrated. Has a dolphin ever directed a classic movie like Total Recall?

You feel obliged to agree how brilliant stuff like The Handmaid’s Tale was, but your true tastes are tacky documentaries about the SS, hellish foreign prisons and serial killers. It’s a painful reminder of being 17 and pretending to like dub reggae, leading to much boredom with zero impact on getting laid.

Skinny jeans are somehow still popular. Even slim teenagers look stupid in them, like they’ve had a pair of spindly cyborg legs grafted on in some sci-fi experiment. The contrast is even worse for anyone with even a hint of a paunch – ie. you. Still, it’s better than giving up entirely, like your dad, who was still wearing his flares in 1986.

A day in the life of Jacob Rees-Mogg, Crusader for Truth 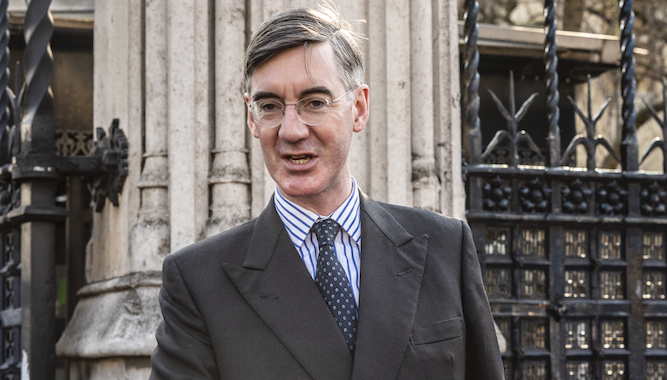 MY liege, and England’s Lord, Boris Johnson is besieged by moral and intellectual pygmies. I must don my ancestral armour and joust for his honour. Follow me!

An early start on Radio 4’s Today, a seditious nest of Marxists and sexual deviants, where I am impertinently questioned about Boris’s fitness for office. I explain that laws have always been subservient to breeding in our sceptered isle and suggest Justin Webb be exiled to Van Diemen’s Land. He cowers pleasingly.

I join Nick Ferrari on LBC Radio, a peasant who knows his place. He agrees that the concerns of millions of British subjects are mere fluff and will blow away on the strong winds of warfare gusting from the duplicitous East. I thank him for his work, as one would thank a hound that stands on its hind legs, and tip him a crown.

I arrive at Pebble Mill At One to learn that the programme in question no longer airs and instead I must appear on a dog-and-pony show called Politics Live. I elucidate once again that the matter is over, the line drawn, the past the past. An impertinent man who ‘lost a relative’ challenges me afore I backhand him with a leather glove.

A special committee of the Commons requires my presence, and I magnanimously attend even though members of the Opposition must be present. Not troubling to learn what it concerns, I declare that Britain desires only a strong Navy, the restoration of rotten boroughs and regular slaughters of the Scots to flourish as a nation. Then take my leave.

I am called upon to appear on an evening news programme despite my well-publicised belief that TV broadcasts should end at 4pm to clear evenings for second jobs. I once again hear the prime minister’s good name besmirched by fools, and draw my rapier to emphasise my point. When will they learn that it is simply not their place?

BBC Question Time, where I am the only guest to arrive on a thoroughbred steed carrying a halberd as tradition dictates. Questions relating to Lord Johnson’s probity are swiftly and finally answered by my crossbowmen, leaving 18 dead. Emily Thornberry is dispatched with the blade and Fiona Bruce must duel me on Sunday or lose all honour. For Boris, and St George.