LOOKING to top up your tan during the heatwave? Get ready to be inflicted with these ridiculous tan lines:

The most common of all dodgy tan lines. Normal people don’t feel comfortable stripping off their clothes and exposing themselves to the sun in public, meaning they’ll end up with pasty skin in the shape of a T-shirt imprinted on their torsos. Luckily nobody will notice, unless you meet someone who wants to shag you. Bear in mind that they’ll have a good laugh at your naked body first.

The sunny weather is the perfect time for a road trip. What could be better than driving to the beach with the windows down and your arm nonchalantly propped out the window? Not being bright red from elbow to wrist on one side, that’s what. It nearly looks as bad as the baseball cap tan line running across your forehead.

Nearly everything about sunglasses is cool. Movie stars look good in them, they give you an air of indifference, and they make you feel more powerful than the sun. The only downside is that you look like a twat when you take them off after a long day of looking suave. You wouldn’t have this problem if you just squinted a bit.

You’ve spent months tracking down the perfect elaborate bikini, and then spent hours trying to figure out how to slip into its intricate network of straps. It’s totally worth it though because you’ll look great when hitting the beach. Just ignore how it’ll leave you with a pattern of stupid tan lines that will be impossible to even out.

Fellas, if you’ve got a beard you need to make a commitment today. Either you stick with your facial hair until autumn, or you shave it all off now to achieve an even facial tan. Those are the only two options. That’s unless you like having a pale jawline which everyone will secretly mock. Make the right choice. 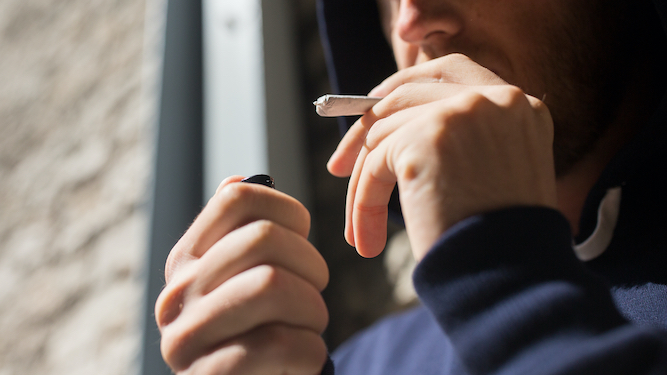 THE government can say what it likes: every Briton knows that cannabis is Class C and crack cocaine is Class A. Here’s how it actually works:

A sensible, thinking person’s classification based on how long it f**ks you up for. And everyone knows that a couple of hours after a spliff you’re pretty much straight again because Mariokart has lost its charm and you regret eating a family bag of Kettle Chips.

Street cocaine is similar, except the return to full functioning is about 20 minutes later and all you want is better cocaine.

If you’re taking any of these, you’re bidding reality a fond farewell for at least eight hours. Even with coke you’re gone for the night. You need to be in a situation where you can close the curtains, abandon all wordly responsibilities and let that shit rip.

Class B drugs are therefore a step up and only for experienced users, not to be done alone and not for anyone who’ll take their hit and then reveal to the horror of all assembled that they’re working on the butchers’ counter at Morrisons in six hours.

The British public makes the rare exception of agreeing with their government on these. These are not substances for the dabbler, because that dabbler will soon be addicted and broken and destitute.

When guys who are into the myriad possibilities of hemp talk about legalising drugs, it’s hoped they don’t mean these. How long do they f**k you up for? Frequently for life.

Alcohol? That’s not a drug. You can buy it at Tesco. Yes, it’s a psychoactive substance which causes altered mental states which you can get hooked on and lose everything to, but it’s not a drug. It’s more of a friend.