'The garden's a bit wild': six innocuous phrases that will totally shit on your weekend

READY for 48 blissful work-free hours, only for your mood to crash on realising the implications of the seemingly-innocent phrase you’ve just heard?

‘The garden’s a bit wild’

Tidying up the garden – making nature in all its mightiness nice and neat – means two hours weeding, a hour of mowing, another hour of strimming, and quite possibly trimming the f**king hedges. Then, exhausted from hours of physical labour, you’re greeted with ‘Hmm. I think we need to put some bulbs in.’

Which means a full day of tidying, dusting, hoovering and generally pretending to live a life entirely other than your own. Why? You’re not junkies in a squat, so what’s the necessity of preparing a facade just because two friends who’ve known you for years are coming round?

‘My mother’s due a visit’

It has been, now you think about it, a blissful month since you saw your in-laws. It’s passed like a dream. Apart from on their side, where they claim it’s been a hellish month of isolation so you’re expected to drive 60 miles for an inedible meal with two retirees who hate you.

‘We’ve got that wedding next weekend’

A rollercoaster of disappointment: your heart lifts that it’s not this weekend. Then sinks when you realise it means you’ll be spending all day shopping for new clothes you’ll wear once and a wedding gift for people you hope never to see again.

‘Shame to waste the weather’

Your primitive equation of ‘it’s sunny’ equals ‘so we’ll spend the afternoon in the garden drinking’ is overruled by the pressing necessity to go somewhere where nature is apparently superior to immediately outside. There follows a long drive and a trudge round a beauty spot marred by every f**ker else.

‘The lounge is looking tatty’

‘Mmm,’ you reply, sailing into the trap with the caution of Admiral Ackbar. And now you’re in B&Q comparing paint shades called Melville, Santa Fe and Natural Hessian before the real hell of applying them to the skirting boards begins. You can’t wait until work on Monday. 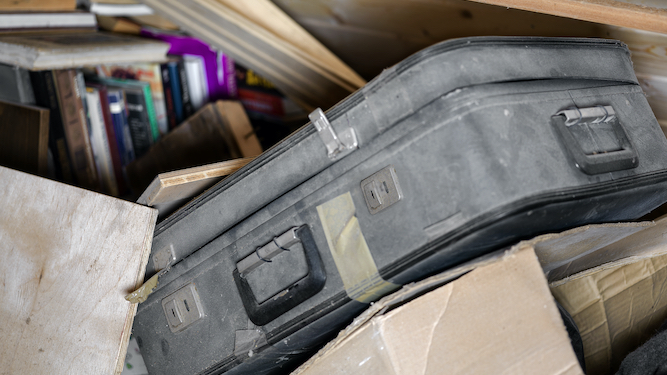 YOUR partner’s boxes of crap should be chucked to free up space in the loft, whereas yours must be kept and treasured. Here’s why:

Your Lego will be worth a fortune one day

You kept your Lego because you knew it would eventually be worth something. Yes, it currently appears to sell for less than a fiver, but, as you assure your partner, it’s all about waiting for the right time on eBay. It will never come, but pretending it will means you can keep secretly playing with it whenever you nip up for a suitcase.

She got a B so she insists on keeping it, even though you can’t tell whether that crappy pastel still life is of a bowl of fruit or a taxidermied ferret. You’re also secretly a bit frightened of the self-portrait, which has a psychopathic stare that you don’t like to associate with the mother of your children.

Your politics essays were a work of undiscovered genius

One day, someone might find these essays and sit reading them, enthralled by the maturity and insight of your 18-year-old self. What will actually happen is that your kids will burn them on a bonfire after you’re dead without even taking a cursory glance.

You look quite good in your old photos

These photos are physical, irrefutable proof that you did not always have a bald spot. However, your partner’s photos appear to feature a series of sexy, smiling ex-boyfriends in sunny locations, and will definitely be finding their way under the drip in the corner of the roof.

You’ve been promising yourself for the last decade that you’ll find a way to play that Now 13 tape, because you’ve got such fond memories of it. You never will, and that’s a good thing because listening to a hissing, tinny recording of A Groovy Kind of Love by Phil Collins will remind you that the 80s were largely shit.