The Lake District, and other horribly overrated UK destinations

GOING on holiday in the UK? Here are five dream destinations people won’t shut up about but which you’ll find deeply underwhelming.

When Wordsworth wrote about the glory and quiet solitude of the Lakes, he wasn’t dealing with a million arseholes in fleeces who’d had the exact same idea as him. Every town is a tourist trap and there are no hidden gems – just miserably crowded cliffsides. The vast amount of Peter Rabbit tat will provide a constant depressing reminder of the existence of James Corden.

If you love overpriced food and accommodation, as well as being surrounded by the slimiest subset of the middle classes, you’ll just adore Cornwall. Struggling to picture yourself there? Just imagine the Med without the culture or the weather. And everyone local thinking you’re sneering investment banker scum who should choke on a scone.

Sure, you might love the idea of snuggling up in a remote Scottish bothy with a whisky and no phone signal, but when the cold sets in and you’re confronted with the reality – that the nearest shop is 50 miles away and doesn’t get a toilet paper delivery until next month – you’ll be living in terror of breaking a leg and dying alone in a ravine, perhaps nibbled slowly to death by goats.

Once you’ve driven the five hours to get to the glorious sandy beach you saw online (Google says public transport would have taken you about six months), you’ll realise it’s nothing like the Caribbean because the Irish Sea is f**king freezing, and the closest they have to tropical cocktails is Bacardi Breezers at the local flat roof pub.

People who live in London never go to the West End, museums or any classic tourist destinations, because they’re shit, overpriced and could be done in a city that isn’t so overcrowded and filled with visible pollution. Enjoying hacking up your lungs as you stroll around Shrek’s Adventure. Also remember how the film was good but a knackering tourist trap with a bloke in green foam suit isn’t. Cheer yourself up with a so-so Chinese meal in Chinatown that you could have got anywhere in the UK.

My adventures in Scotchland, by Liz Truss 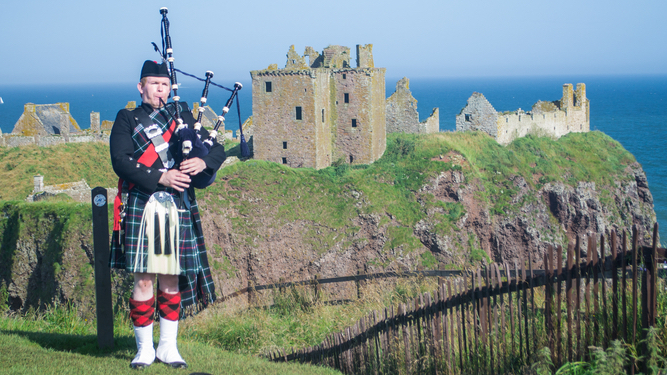 HOOTS, I’ve caused a stir by saying we should ignore Nicola Sturgeon and Scotchish independence. Here’s what I learned during a government fact-finding trip to this strange, backward little province.

Sturgeon is the Queen of the Scotch

I thought their leader was Sean Connery, but it turns out to be Sturgeon, who I’m sure is Wee Jimmy Krankie. You’d think someone would have noticed that before and commented on it. But that’s why we can ignore the SNP. You can’t have a country run by a schoolboy, even if he was on Crackerjack.

The language is very confusing

You’ll need a translator. Apparently ‘auld’ means ‘old’. How on earth are you meant to work that out? ‘Buckie’ means ‘Buckfast tonic’ – a slang term without rhyme or reason. And although ‘ya bawbag’ sounds like ‘you ballbag’ it actually means ‘Nice to meet you’, as in ‘Ya bawbag, Truss’.

Can we trust them with Trident?

I understand English people’s concern – we don’t want to be nuked by a Scotch who’s seen Braveheart too many times! But I doubt they really understand what Trident is. I leave my cat Disraeli unsupervised all the time, and he hasn’t worked out how to use the cooker. Maybe he’s a bit slow. I shall ask another cat owner if theirs uses the cooker.

The Loch Ness Monster is real

I spent an hour by Loch Ness throwing bits of tuna sandwich in and, bold as brass, a Loch Ness monster swam right up to me. It was furry with whiskers and about the size of a small dog, which was odd because I expected it to be more like a dinosaur. Clearly the scientists need to do more Nessie research.

A professional bagpipe hunter informed me that these strange creatures with five wooden legs are widely hunted for their meat (haggis) and to be turned into musical instruments. This is no way to run a modern economy. The Scotch should find out if they have any valuable natural resources to sell, such as oil, or develop a thriving cheese industry.

My final thoughts on Scotchland

Despite it being a pretend country, I’m very fond of Scotchland, with its yappy little terriers and fun-loving heroin addicts like Ewan McGregor. When I’m prime minister I’ll extend the hand of friendship and be just as popular with the Scotch as their favourite PM, Margaret Thatcher.