THAT thing you used to have? Selling for a grand on eBay now. If only you’d kept it, along with all this shit:

Remember that New Order poster you transferred between five different flats, the corners getting more ragged with each move so you threw it away? Everyone else who owned it did the same, which is why surviving copies are going for f**king hundreds.

Ah, you loved these. They were so cool and you were the only one in your year to have a first-edition holographic Chansey. Then you got a girlfriend in Year Ten and threw them away. Threw away several thousand pounds.

They were always giving these out back in the day, in the streets outside record shops. You kept a few in a bedside drawer or something because you liked the art. You don’t even remember throwing them out. You don’t want to know how much they fetch now, for the sake of your sanity.

You’ve still got that collection of football programmes and comics. You’ve kept them pristine too. So’s everyone else. That shitty photocopied fanzine you picked up for a laugh? No idea where that went. Shame, it just sold for £780.

You’ve got those! You saved them, along with the original console! You might even have the boxes! Okay, you’ve not got the really valuable ones but still, score. Until your mum tells you they went to the Scope shop six years ago. She still has your ZX Spectrum games, though. A cassette of Jet Set Willy fetches £1.99 plus postage.

You got Chelsea shirts every birthday for nine years. You wore them to death and they defined your identity. Which is sad for all kinds of reasons, not least because they could have paid off your mortgage years ago.

You were conditioned to think of valuable vinyl as Bowie LPs and Beatles singles, meaning you never considered for a moment that your sisters’ Spice Girls and George Michael records could be worth big money. Pity you ruined them by pretending to do scratching while stoned with your mates for a laugh. 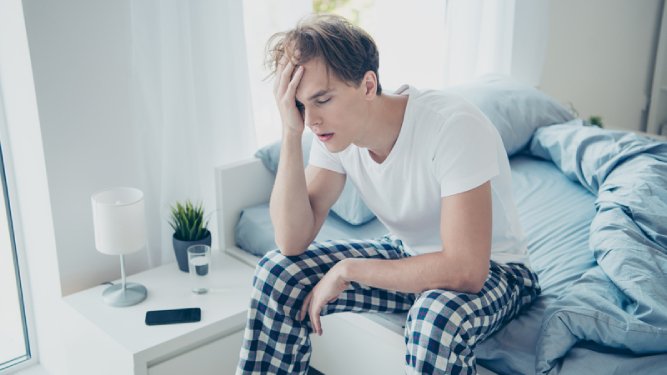 A MAN who is too young to know what a bad hangover actually feels like thinks he is experiencing one.

Joshua Hudson, aged 20, has woken up from a night of binge-drinking wine, beer and mixed spirits with a headache, yet is acting as if he is living through the room-spinning nausea of the proper hangovers which real adults endure.

He said: “Christ. What time did I get to bed? I can’t have had more than eight hours undisturbed sleep. And I feel a bit sick. Hangovers don’t come much worse than this.

“Hopefully the full English breakfast my mum’s cooking me will soak up some of the damage, although I reckon it’ll be at least a couple of hours until I’m feeling 100 per cent like I can handle a pint again. Curse this apocalyptic hangover.

“Now I know why hungover people say they’re ‘never drinking again’ and wear sunglasses to block out dazzling lights. It’s because, like me, they have a bit of a dicky tummy and have to lie in bed watching Squid Game on their phones until mid-afternoon.”

Joshua’s dad Tom, aged 52, added: “Proper hangovers don’t start to kick in until your thirties. When Josh goes through one, he’ll finally be a man. A broken, retching shell of a man.”