A TOURIST in search of Leicester Square assumed he was in some other grotty part of the capital when in fact he was in the middle of it.

Tom Logan was visiting London from Doncaster and had successfully reached the world-famous tourist attraction, but could not believe this hellhole was it.

Logan said: “Having turned left at Charing Cross Road as indicated on my map, I found myself in a dismal, flyblown zone full of fast food outlets, scaffolding, giant green wheelie bins and a park which looked like a vagrants’ dormitory.

“There were also smaller outlets selling world cuisines at their worst and most overpriced and some tatty chain pubs. I assumed I’d taken a wrong turning.

“I’m not saying I expected to see the Queen and Hugh Grant doing the Lambeth Walk as I sat in a tea shop, but I wasn’t expecting this oversized precinct selling souvenir tat, foul fajitas and plastic policeman’s helmets.”

A disappointed Logan then watched a film he could have seen anywhere in the UK, and now says his next day trip will be to “somewhere much nicer, like Leicester”.

Your guide to lying about how much you smoke 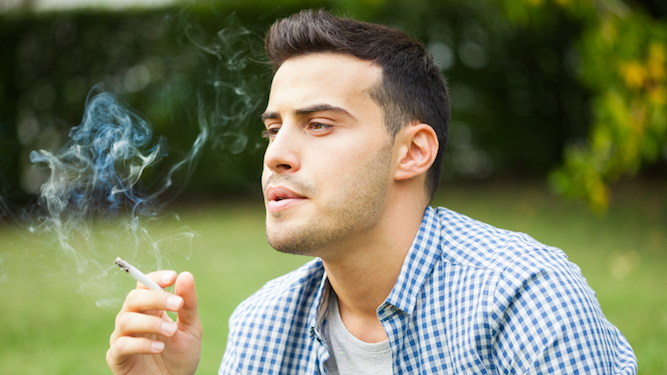 DO you think you’re ‘cutting down’ by pretending to smoke less than you do? Here’s how to convince yourself and other people.

Be creative with the numbers

If asked how many you smoke a day, say something innocuous like “Oh… maybe five or six”. Lie to yourself enough and you’ll start to believe this is true, rather than the correct figure of “20 if it’s normal fags, if it’s roll-ups, about 100.”

Claim the smoking ban has ‘practically made you stop’

You’re not daft enough to stand in the freezing cold for the sake of a fag, right? Neglect to mention that during any trip to the pub you’re up and down like a jack-in-the-box as you go for a fag every 15 minutes and hail the size of bricks wouldn’t stop you puffing away.

Focus on the times you don’t smoke

Cheerfully tell people “Sometimes I don’t smoke a cigarette all day!”. Don’t dwell on the fact that this is only because it’s really difficult to smoke at work and you are constantly thinking about lovely fags. Or your ‘binge smoking’ in the evening when you easily overtake a daytime smoker on 40 a day.

Pretend you only smoke when you drink

Which is a hell of a lot, and you have to finish off the packet because they’re so expensive. To not do so would be a massive waste of money and totally irresponsible.

Gravely tell everyone you’re giving up, when you really mean you’re thinking about giving up. It’s a shame this principle doesn’t apply to the rest of life, because we could all easily be billionaires or go out with Scarlett Johansson.