Trampoline in front garden knocks 15 per cent off house prices

THE value of every house in a street has dropped by 15 per cent after a child’s Christmas trampoline was set up in the front garden.

The 12ft Sportspower trampoline first appeared in the garden when assembled on Boxing Day, and was assumed to be moving to the rear garden until tethered to the lawn with ropes this morning.

Neighbour Martin Bishop said: “Well, bang goes my hope of unlocking my capital with a swift remortgage. Not with that f**ker there.

“I have nothing against the joyful cries of children, but the little bastard’s up and down on there all day long. He’s out in his pyjamas at 8am. That’s not kerb appeal.

“Some neighbours exchange presents at Christmas, I wasn’t expecting ours to give us negative equity.

“I’ve had Purple Bricks out and they’ve confirmed there’s a sixth off the price of every house in the street, with a further two per cent annual annual depreciation once it starts to rust.”

Trampoline owner Steve Malley said: “Apparently it’s easier to plumb in the hot tub if we have it out the front. That’s happening in spring.” 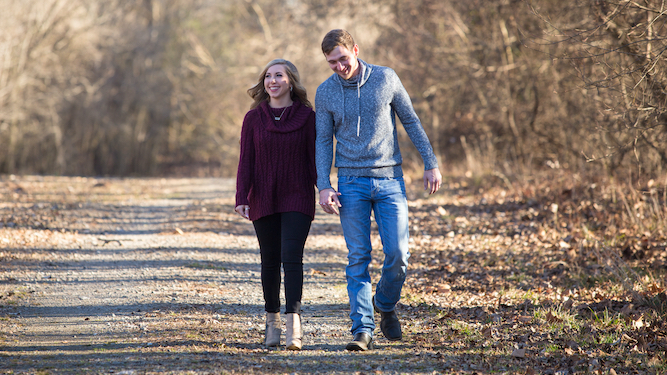 A COUPLE enjoying a bracing walk to welcome the new year are still off their faces from last night.

Ryan Whittaker and Lauren Hewitt began 2021 by blacking out at the end of a narcotics-heavy night in, before waking up fully dressed on the carpet at midday and heading out for an invigorating walk.

Whittaker said: “Just because we’re still gurning, it doesn’t mean we can’t appreciate the fresh air and sheer beauty of the open countryside.

“This is really going to blow the cobwebs away. And, hopefully, the remnants of these class A’s that are still coursing around my body.”

Hewitt added: “Our New Year’s walk is a real tradition, just like our New Year’s Eve tradition of meeting a dodgy man in a car park to score coke.

“We love being immersed in nature as it’s almost as good as being off your face on drugs. But not quite.”