What downmarket crap will delight your kids most this half-term?

KIDS will hate the educational activities you have planned for half-term. However they will lovingly remember these lowbrow experiences forever:

Even if they can only eat two slices, your kids will be crazed with excitement at the idea of unlimited Meat Feast pizza and bacon bits from the salad bar. And don’t forget the ice cream factory, which will pump them full of so many E numbers they won’t sleep all week. They’ll cherish this much more than the gallery trips you had planned.

A film at a sticky-floored cinema

It smells like old popcorn, the trailers are ear-splittingly loud and someone is constantly rustling through snacks right next to your left eardrum, but the kids love it anyway. Meanwhile you’ve just sunk the best part of 50 quid to watch a film that’s bad on every level except extracting cash from the parents of undiscerning kids.

Miserable enough at the best of times, soft play areas are even worse during half-term because they’re swarming with other people’s screeching offspring. And while your kids have fun jumping into ball pits, you get to sit in dead-eyed silence next to other parents while drinking lukewarm vending machine tea.

Pop Its are a sensory toy designed to relieve stress, which is pretty f**king ironic because the sound of your kids begging you to buy them another one will send your blood pressure through the roof. They’re just glorified re-usable bubble wrap made from lurid plastic, but no matter how many times you angrily explain this to your children they won’t listen.

Giving your kids a pound coin to blow on the sweet section will be the highlight of their week off. Meanwhile you’ll be left to shop for boring grown-up things like scouring pads or batteries. You’ll feel like a bad parent while browsing lint rollers, but they’ll appreciate this shopping trip more than that holiday in Center Parcs which took half a year to plan. 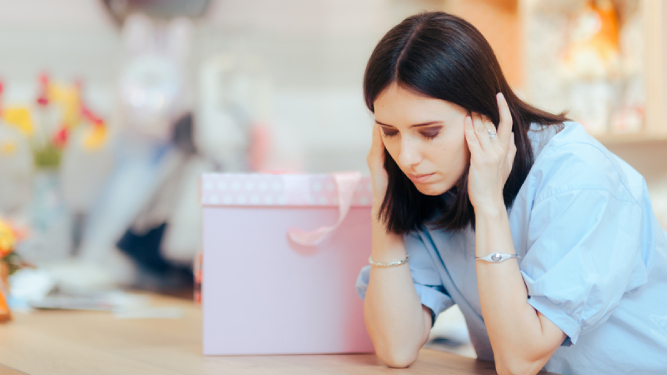 A SALES assistant was distraught to learn a customer will be shopping elsewhere following a minor incident.

Dorothy Perkins worker Francesca Johnson was in floods of tears after shopper Nikki Hollis said she would no longer be purchasing unadventurous floral dresses from them in the future.

Johnson said: “It was during a lunchtime rush when I spotted her tapping her foot in the queue. Then she let out an over-dramatic sigh and I knew things were going to get worse before they got better.

“When she finally got to the till she had a go at me about the ‘unacceptable’ waiting time. Naturally I was racked with guilt, like a murderer. I pleaded with her that it was because of a dozy cow who tried to make a return without a receipt but she wasn’t having any of it.

“Just as I thought things couldn’t get any worse she looked me dead in the eye and told me she’d be going to Peacocks from now on instead. Then I felt a sense of crushing shame that I don’t think any human in history has previously experienced.”

Hollis said: “Is it too late to take back what I said? Peacocks’ clothes are piss-poor in comparison and I’m barred from everywhere else.”